Another busy day began, finally, with visiting the Louvre. We walked into the courtyard and right up to the glass pyramid, which is maybe even more famous than the Louvre itself thanks to The Da Vinci Code, and got inside.

We bought our tickets and decided to see the Venus de Milo first of all. We spent quite some time looking for it, but in the meantime had the opportunity to view other Greek and Roman sculptures. I have to mention that we recognised the Venus from afar – by the great number of people around it. 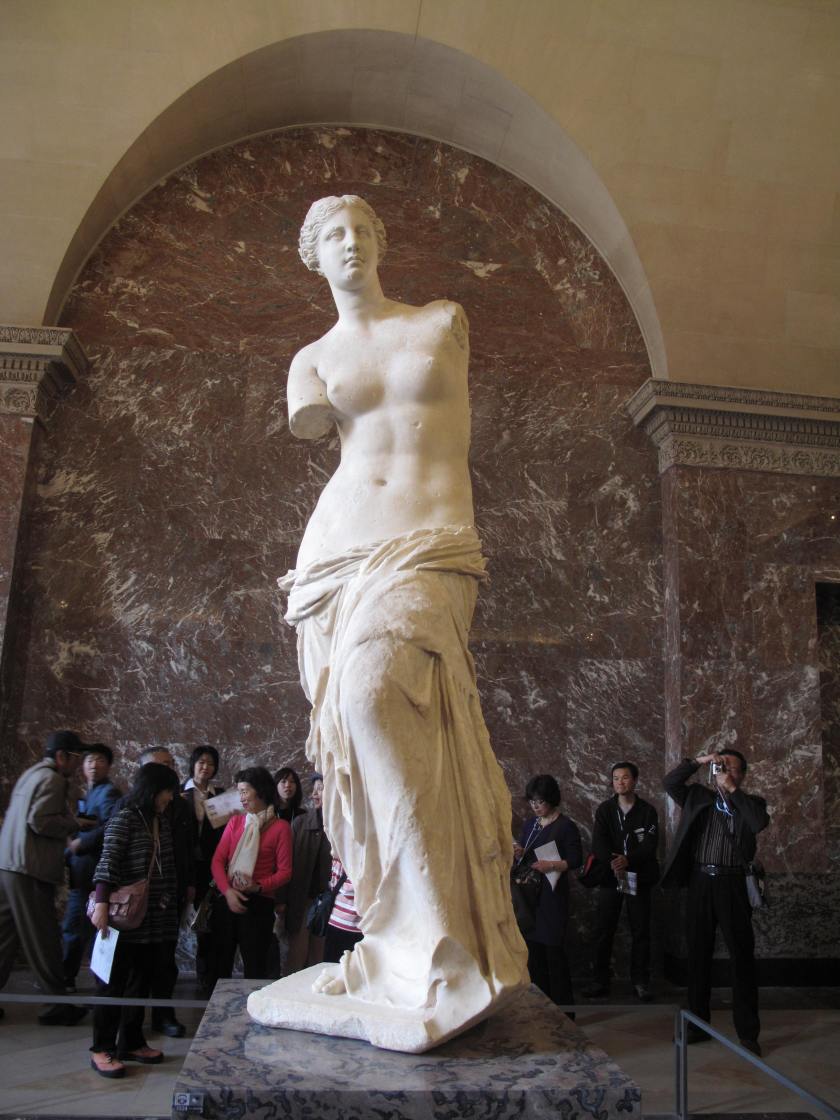 That’s when we realised that it was a good idea to find the Mona Lisa immediately, while it was still pretty early, because later there would be an incredible pandemonium around it; and after that take our time and see some less popular paintings. And it paid off – there was already an impressive crowd gathering around the Mona Lisa by the time we found it, and later we wouldn’t have been able to get anywhere close to it. As one Russian guy said to another: “In a crowd like this you can’t really find the hidden meaning behind this painting!” But judging by the photos that I made, the meaning was hidden in the bald head of a man, which was reflected in the painting’s glass 😀

After enjoying La Gioconda for a while, we took our time to see some Italian, and then Spanish paintings (and the latter, we enjoyed the most). In the end we went upstairs to see the Dutch School representatives.

I would say, the optimal time spent in the Louvre should be no less than three days. And spending the whole day there, I believe, would be too tedious, and impressions would get all mixed up. As for a half-day visit, you can either gallop around the museum and not really see anything, or, as we did, choose beforehand what you most want to see, and devote your time to it. By the way, I was impressed by the large number of Russian tourists in the Louvre.

As we were done with the Louvre, we went to Monmartre. Mom was grumbling about the need to climb to the Sacrè-Cœur Basilica, but it was totally worth it, because the stairs were really beautiful, and the view on the city from there was magnificent. Plus, I have to admit that we hadn’t been able to find the funicular. Even despite the fact that, while we were standing near the metro station on Place Pigalle, feeling lost and staring at the map, an elderly lady came up to us and offered her help, and when we asked her how to get to the Sacrè-Cœur, she replied that there was “un petit bus” somewhere around (obviously, she meant the funicular), which accepted normal tickets for public transport and it was better to use it, otherwise there were too “beaucoup d’escaliers”.

Generally, Monmartre is an amazing place! Narrow cobbled streets, a huge number of cafes, street artists, a fabulous view of Paris … By the way, Montmartre is part of that very 18th district, which I didn’t like on the way from the airport. I found the Sacrè-Cœur a lot more beautiful than the Notre-Dame on the outside.

In the evening I met my Azeri friend once again and we went to the Latin Quarter to have dinner. It is also a very interesting and colourful place. Narrow streets are packed with endless restaurants – French, Italian, Greek, Chinese, Korean, in other words, anything you may wish; in front of each there is necessarily a tout, trying to persuade passers-by that their restaurant is definitely worth visiting immediately. After we already had dinner, I found that one of the restaurants on the Saint-Sévérin street served fried frog legs. So tomorrow I will come here again!