This day didn’t go without stupidities as well, and I must say, I’m incredibly exhausted! We started the day with a visit to the Hôtel des Invalides, intending to see Napoleon’s tomb. The turnstiles in the metro weren’t working: «Ça marche pas!» – happily exclaimed a guy walking by. So we took a free ride and got to Les Invalides.

We bought our tickets, and first popped in the Army Museum, located in the same place. It’s really surprising to see how patriotic the French are and how much they respect and love their history. Unlike back home, where with each new form of government the old one is anathematised, everything is renamed, all monuments are demolished. Here they appreciate everything, starting from the Gauls, all the Louis’, the Emperor Napoleon, all their republics… And also it looks like they are a very warlike nation – no surprise they are represented by Gallic roosters. Everything seems steeped with wars; the whole city is full of historic sites dedicated to various victories and battles.

What I liked the most in the museum were the figures of French soldiers of different eras, especially the ancient ones: Gauls, Normans, Carolingians, Merovingians … 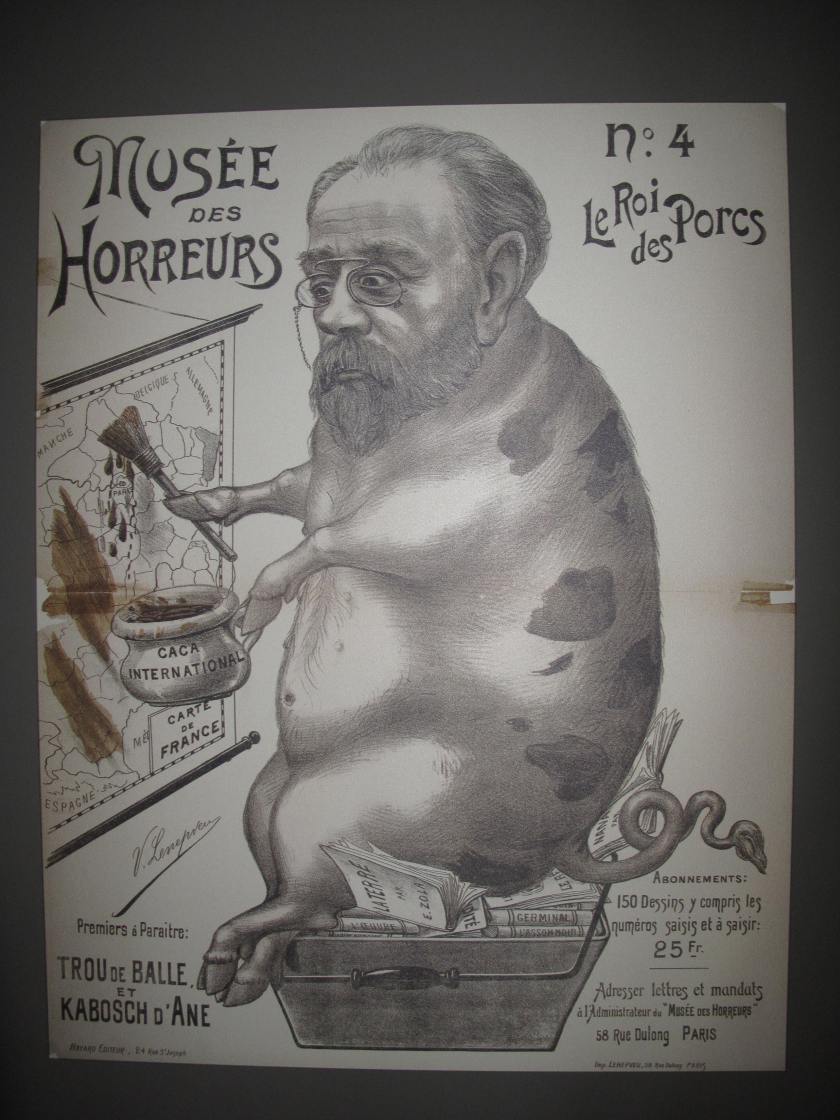 We didn’t want to spend too much time in the museum – after all, we are not extremely excited about arms. So off we went, right to the Dome church, where the Napoleon’s tomb was. It was cold there (just like it should be in a crypt), and right in the centre was the magnificent tomb of Napoleon. In principle, the reverent attitude of Parisians to Napoleon is quite understandable – he constructed a lot of streets, built houses, including the Hôtel des Invalides for disabled veterans. 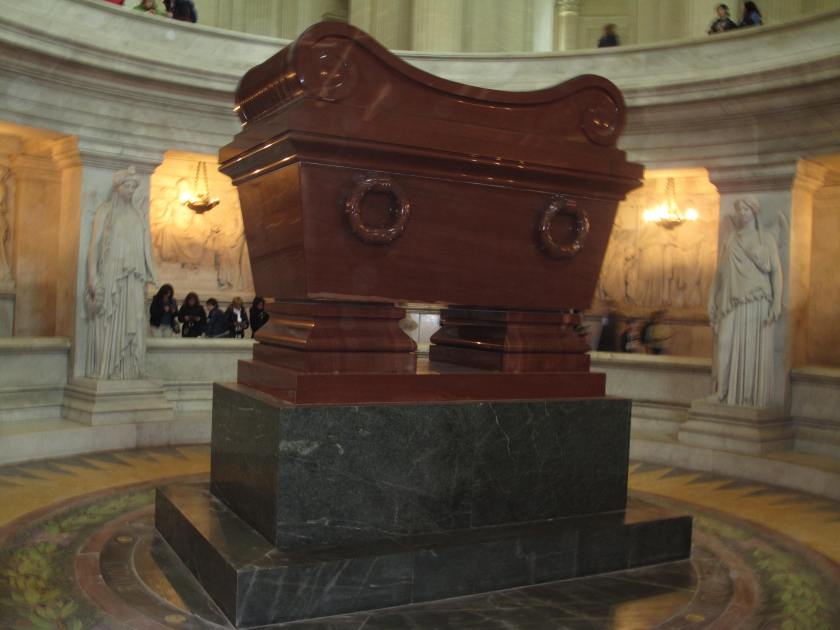 It felt relatively warm outside, after the cold church, but it was raining. It was the first time it rained here since our arrival. As I was intending to have frog legs for lunch, we went to the Latin Quarter and found the same restaurant (Auberge de Saint-Sévérin) on the Rue Saint-Sévérin.

By the way, we took the RER, and not the metro, to get there. It was more convenient, as we would have to make two changes on the metro. But we entered the metro station first and then changed to the RER station. And we had to spend an extra ticket there, so as they say, there is no such thing as a free lunch (i.e., the non-functional turnstile in the morning). 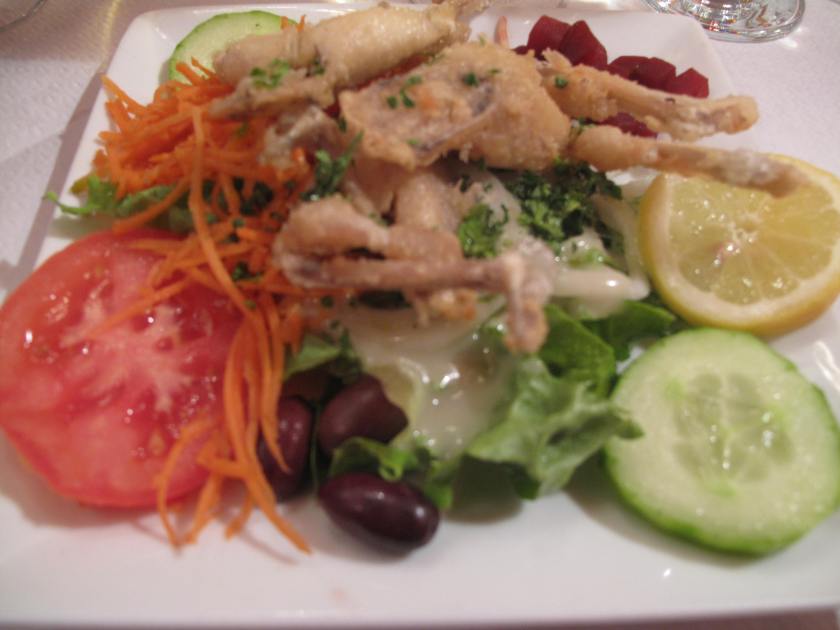 Coming back to the frog legs, I quite liked them – they tasted somewhat like poultry, although a little bit dry and insipid. I also liked fish with sauce – after all, who, if not the French, knows how to prepare excellent sauces? Of course, they are all excellent! What I liked the most about this whole situation was the fact such a wonderful three-course meal with wine for two cost us only 40 euros including tip. And the restaurant had a beautiful cat! 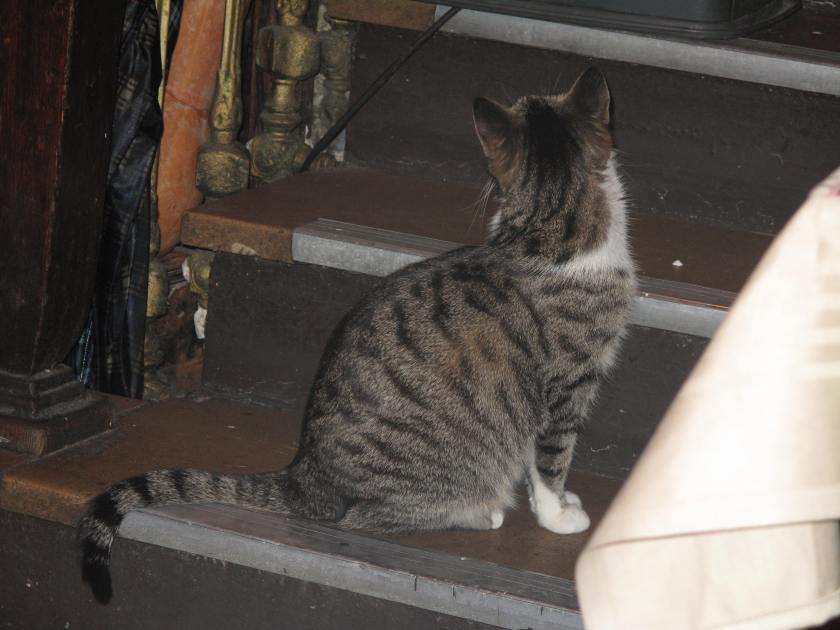 We were planning to do some shopping after lunch, but once outside we realised that the rain had stopped, the clouds had parted and the weather was gorgeous. So we played it by ear and walked along the Boulevard Saint-Michel.

The boulevard was lively and cheerful, especially in such weather. We even were able to do a bit of shopping and bought a pair of shoes each. As the Sorbonne was supposed to be very close, we decided to take a look at it. However, as I tried asking various people the question «C’est où, la Sorbonne?», one man replied «I don’t speak French!», another woman looked puzzled and misunderstanding, and only the third Madame explained how to get there. So much for Paris, with the alleged impossibility to address to people in English, and their desire to respond only in French. On the other hand, it sometimes happens that you get “responded in French,” even when you ask nothing. For example, the old woman in Montmartre yesterday. Or today, when we turned off the Boulevard Saint-Michel to the no less cheerful Boulevard Saint-Germain, discussing how far away the  Saint Germain des Près metro station was from here, we were approached by an elderly man who said: «Le métro Saint Germain des Près, c ‘est là-bas! », and pointed in the opposite direction of our movement.

And by the way, we were interested in the metro for a particular reason. When I walked with my friend in these neighbourhoods the other day, we wanted to go to the Café Ladurée, serving fantastic sweets (according to my friend!). The cafe was closed then, but in a shop window next door, I spotted a gorgeous red evening gown. And now, I wanted to find that very boutique. We went round and round the narrow streets, and were just about to give up (as our feet were already pounding with pain!), when we noticed the Café Ladurée, and next to it – the shop we’d been searching for. We rang the doorbell, went in and asked how much it cost… Deux mille-something (€2000+) … Yeah, dream on, Leila!

On the way back we nearly got stuck in the metro – suddenly the train stopped in the tunnel, the lights went out, and the driver said something very fast – in fact, so fast that I didn’t understand a single word. But luckily it didn’t take longer than ten minutes.

In the evening once again I met with my friend and his friends and colleagues at the La Cordonnerie pub on Réaumur-Sébastopol.