Surprising, but fact – I am a person who has seen quite a few countries, including far ones, but has never been to the neighbouring Turkey. Yet, every self-respecting Azerbaijani, who has the opportunity to travel abroad, has definitely been there. So I finally decided to fill this unforgivable gap, and here we are, flying to Istanbul!

The flight begins with mixed feelings: there is no online check-in, which is bad, but we end up without a seat neighbour, which is good; our seats are at the very rear of the aircraft, which is bad, but breakfast starts being served from the tail of the cabin, which is good. First we are flying over mountains – underneath us there is the majestic Caucasus, with its dazzling snowy peaks! – and then mostly over the Black Sea.

The Istanbul Ataturk Airport is definitely worth a mention – the speed and the quality, which we observed while going through all the necessary stages of arrival, really impressed us. Such a contrast with, say, Heathrow, where you hang around for a good hour in an extremely slow queue at the passport control. The queue here isn’t any shorter, if not longer, but it’s moving speedily and cheerfully all the time.

At first glance, Istanbul didn’t strike us with anything extraordinary. We are going in a taxi, on our right side we see the Marmara Sea, and on our left side there are some buildings, not very expressive ones.

Our hotel is located in the Pera district in the European part of the city, and is literally a stone’s throw away from the central pedestrian street Istiklal Caddesi. In general, we were advised – and we also advise this in our turn – to choose a hotel in this particular part of the city, and definitely not in the Old Town, where most of the tourist attractions are. In fact the Old Town area is only lively during the daytime, while Istiklal Avenue and its surroundings provide the tourist with everything they need – food, drink, shopping, entertainment – at all times of the day and night. View from our hotel window:

So Istiklal Avenue is where we start exploring Istanbul today. Our hotel’s location is such that if you walk a kilometre to the left, you will get to Taksim, and if you walk one (plus a bit more) to the right, you will reach the Galata Tower.

We first turned left. A historic tram line passes through Istiklal Caddesi, and this is the street’s only transport, apart from cleaning vehicles and police cars, which, by the way, also try to drive along the tramway track so as not to disturb pedestrians very much. For people from Baku, the best description of Istiklal Avenue is that it’s Istanbul’s “Torgovaya”, only a very long one.

We are surprisingly lucky with the weather today: despite it being February, it is so warm during the daytime that we have to take off our outerwear every now and then. When we sit down on a bench on Taksim Square, the sun is literally scorching. The square itself does not seem very cozy. We sat there for a bit and looked at a mosque under construction, at the “Republic” monument with sculptures of Ataturk and other marshals, including the Soviet marshal Voroshilov, and then turned back to Istiklal Caddesi, more interested in the tram, with roller skater boys clinging to it, than in the square itself. 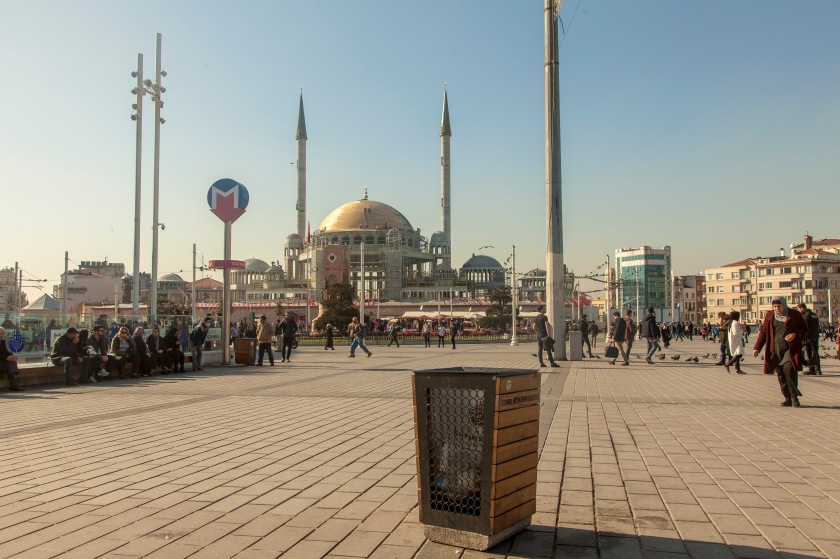 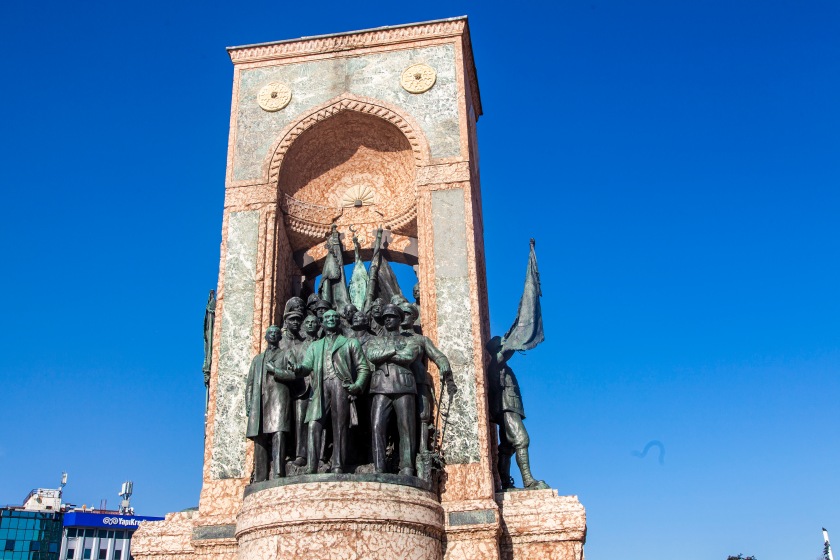 Walking Istiklal Street is very pleasant. We are eating wonderful roasted chestnuts, which are sold at every corner, and dondurma – the special stretchy Turkish ice cream, which the seller scoops onto cones, using a long-handled paddle, and turning the whole thing into a real show.

A separate paragraph should be devoted to the cats of Istanbul. There are lots of them, and this is the only place I have seen where cats are as beautiful as in Baku, but here they are loved and cherished much more. Almost every store or restaurant has food and drink bowls for cats, and often even a special little cat house. However, the most audacious cats prefer to settle in a chair right inside. There are quite ordinary-looking cats, and there are also simply outstanding examples of fluffiness and fatness. Dogs can also be found, though less often; all of them are microchipped and seemingly contented. 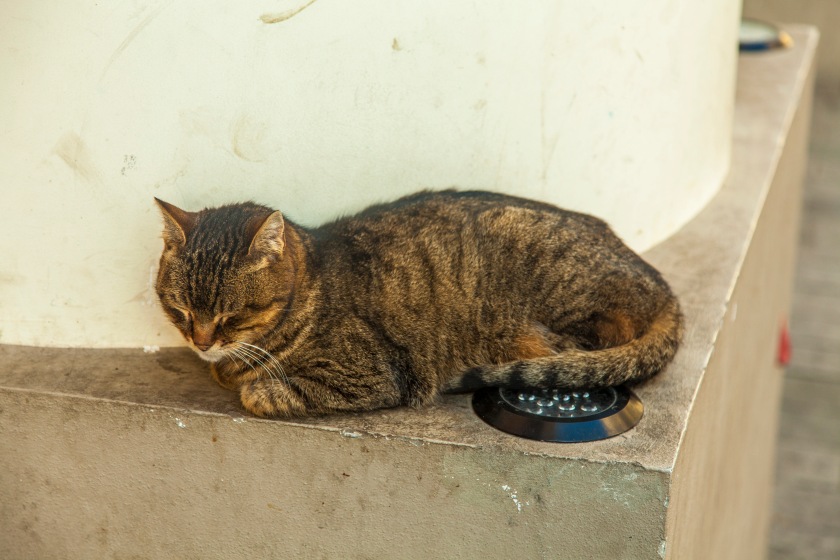 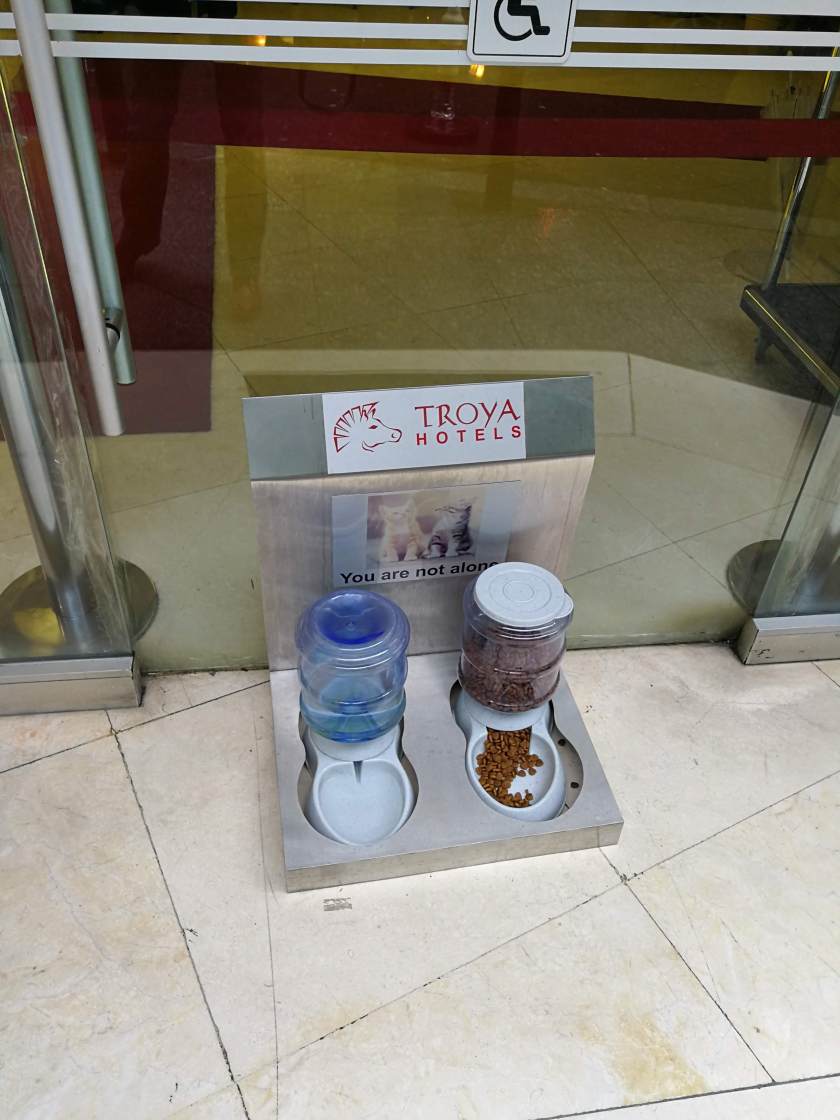 What’s also interesting on Istiklal Caddesi is that there are quite a few Christian churches. We walked into one – the Basilica of St. Anthony of Padua, and, as it seemed to me, there were quite a few Turks praying in it, although I could be wrong.

We reached the Galata Tower quite unexpectedly – for some reason I had the impression that it was in the opposite direction, and then suddenly we saw a signpost. It was about 5pm, and at first we decided to wait for the evening to take pictures of the tower in the evening light, and then thought that instead of idly waiting around we might as well go up to the observation deck (previously we were planning to do it tomorrow). The queue (maybe it’s a property of all the queues in Istanbul!), despite its impressive length, was moving rather quickly. We wondered if there was a lift inside the tower, or if we would have to climb a spiral staircase. There was a lift, yet we still had to climb the last two floors. 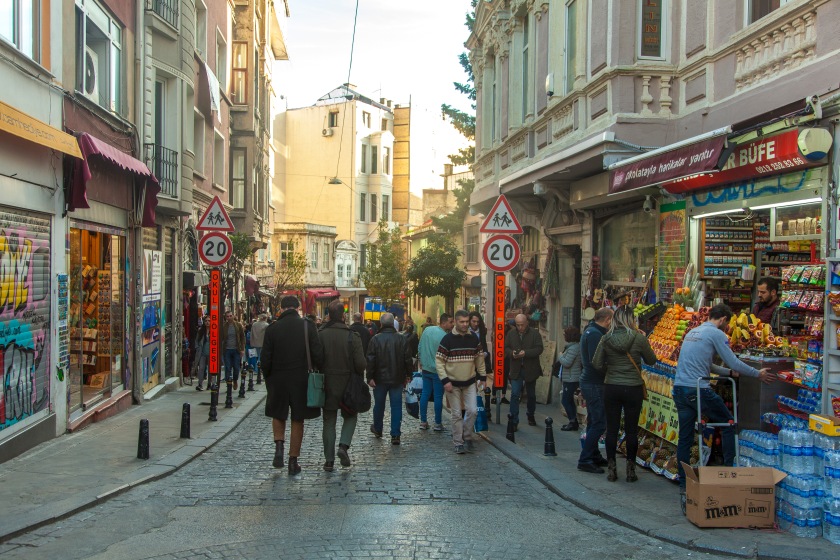 I must say that a moderate wait in the queue and a dizzy climb up the eerie stairs were totally worth it. The view of Istanbul from all sides is magnificent! A special feature are the large seagulls, which land on stone balls from time to time, right at arm’s length, and observe the city, looking very smart and important. Obviously, just like the tourists here, they are admiring the Bosphorus, the Golden Horn Bay, the famous mosques in the Old City. The only slightly annoying bit is that there are too many people on such a narrow rim of the tower, especially when not everyone is following the instructions to move only clockwise, which leads to chaotic cramming. 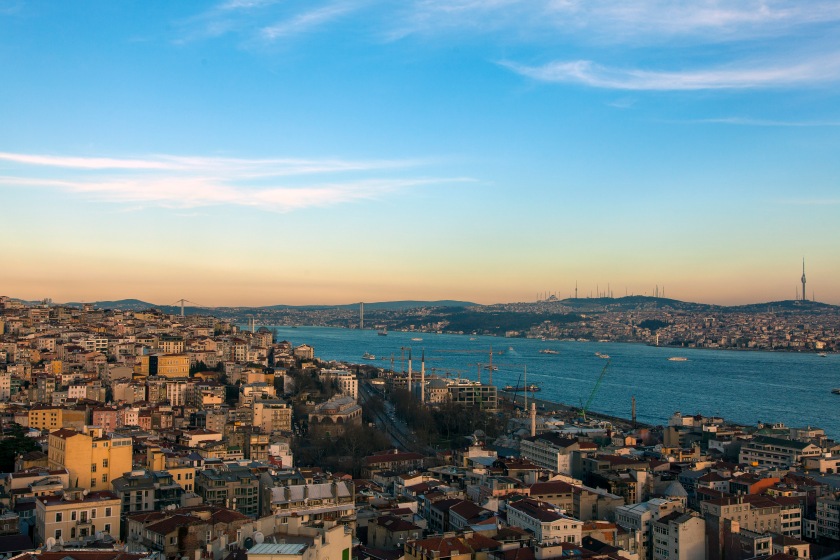 The tower also offers another entertainment – a simulation of a helicopter flight, which we didn’t find tempting though. However, we were taken a ton of pictures of, wearing historical costumes of harem dwellers. The poster advertising this attraction beckons you with a price of 30 liras (about 6 USD) per photo, but the ingenious photographer takes so many beautiful photos, with a variety of props, that you almost unwittingly end up forking out a lot more. But we still liked it!

To make sure we do get to see the Galata Tower in the evening light, we decided to have dinner in a restaurant directly opposite it. The weather and the heaters allowed us to sit comfortably outside (in February!) As for the restaurant, what can I say? Delicious kebabs, excellent service.