Today we left our hotel at 8am for our first excursion in Chiang Rai and headed up north, to the Doi Tung Royal villa with a beautiful garden.

The garden is one of the successful projects of the late Queen Mother, who tried to combat drug trafficking in this dysfunctional region, bordering Myanmar, by increasing employment. 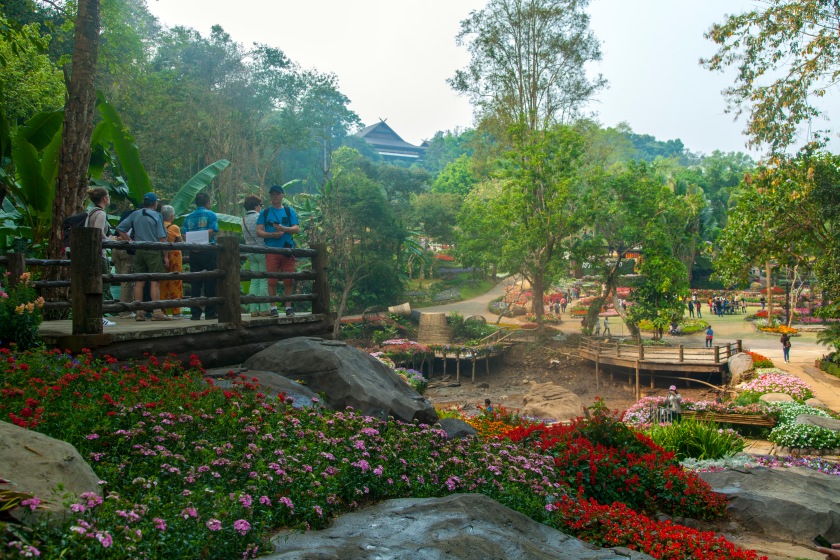 And indeed, the garden is very beautiful. At an altitude of 1300 m above sea level, it is much cooler than Chiang Rai itself, and full of the most diverse flowers ever – predominantly European, but including some local orchids too.

The actual royal villa, where the Queen Mother used to live, is located further uphill. We went up to the residence – again, strict dress code had to be followed there and we had to cover up – and went inside. I managed to take one photo before a lady from a French tourist group – the only tourists apart from us, I wonder where the crowds of Chinese tourists are? – warned me that this was prohibited. 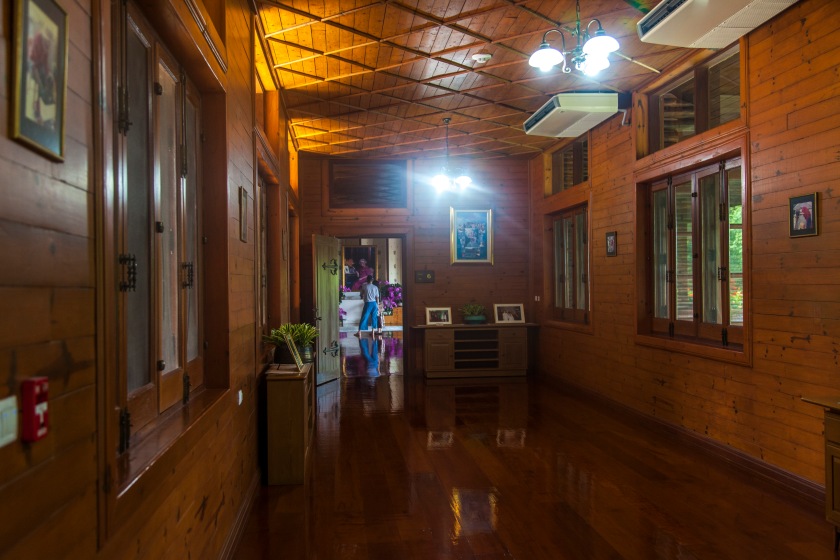 The residence is essentially a huge wooden hut, the entire interior is also made of wood. Some of the Queen’s personal belongings are exhibited, in particular tools for embroidery and pottery. The balcony provides stunning views of the garden that we saw before. 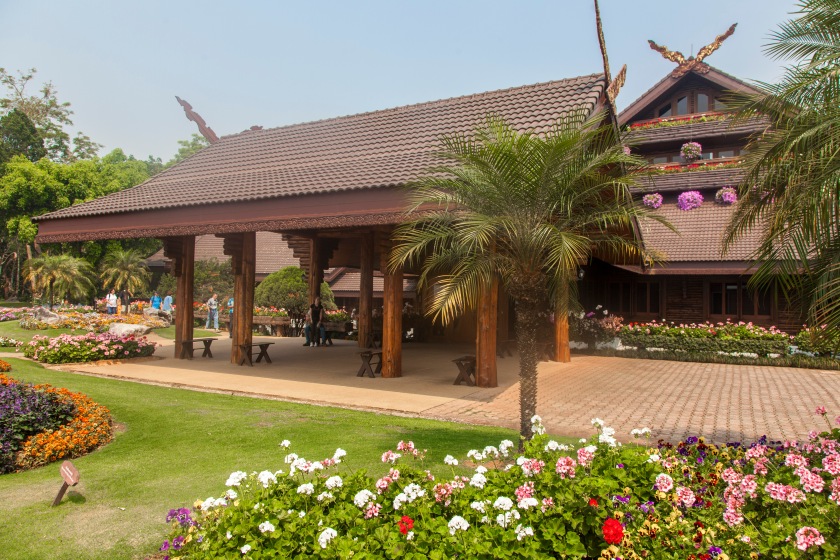 There is another attraction at the very top of the Doi Tung mountain, where we had to get by car. These are two stupas in a typical Lanna style, erected as far back as the 10th century and containing Lord Buddha’s relics – namely, his collarbone.

There is also a temple next to the stupas, very intricate from the outside, but not particularly remarkable inside. As for the stupas themselves, we couldn’t come close to them – women are not allowed to. 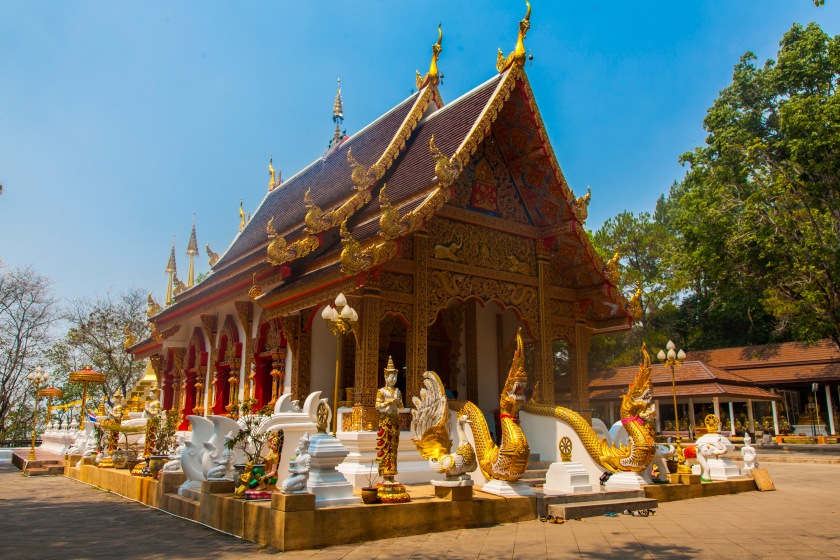 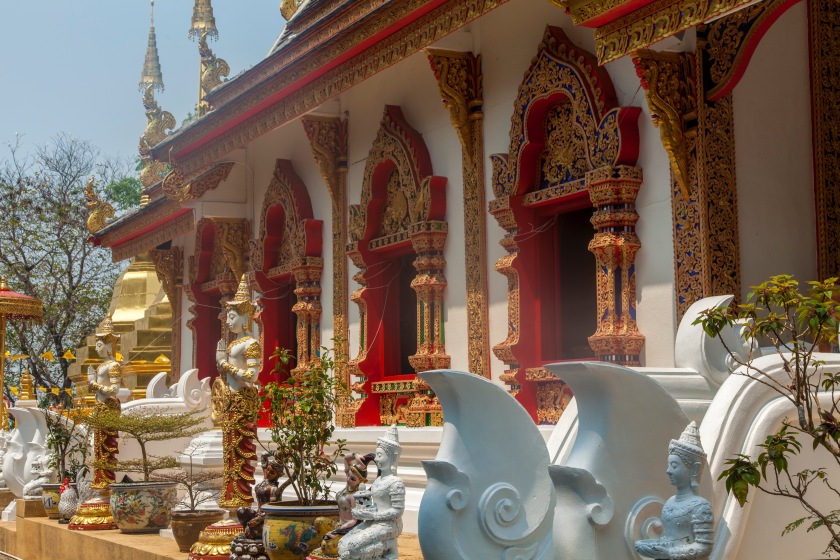 By the way, our guide Dino told us that these stupas were especially sacred for people born in the year of the Pig (or Elephant) according to the Eastern Zodiac. And for each of the zodiacal animals, there are respective stupas all around Indochina. It is believed that everyone should visit the stupa corresponding to their zodiacal animals and pray there at least once during their lifetime.

On the way back down to our car we descended a stepped alley with lots and lots of bells of different sizes at the sides. 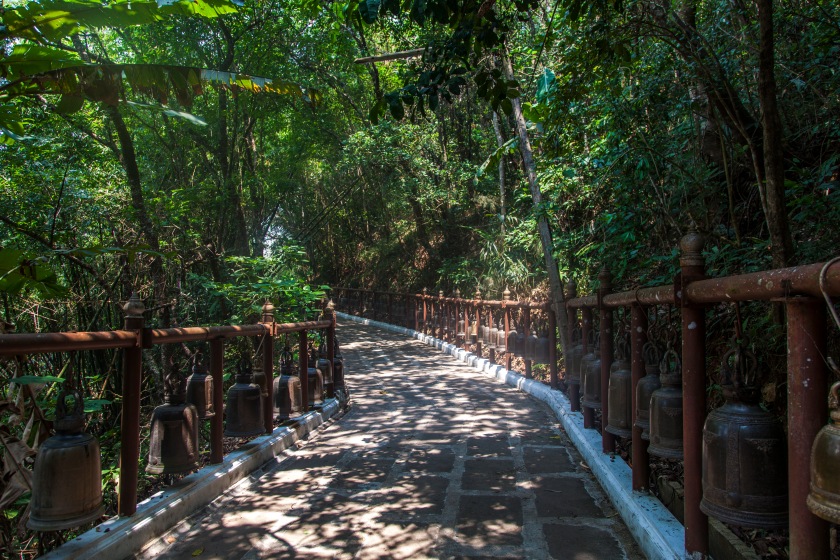 It was already lunch time, and we stopped at some roadside eatery. I had read somewhere that in Thailand the most delicious food can be found right in such non-glamorous places (in China as well, by the way – as confirmed by myself), and it turned out to be exactly the case! We got two servings of spicy chicken noodle soup, and we liked it a lot. And it cost us 70 baht for two, which didn’t even make 3 USD! 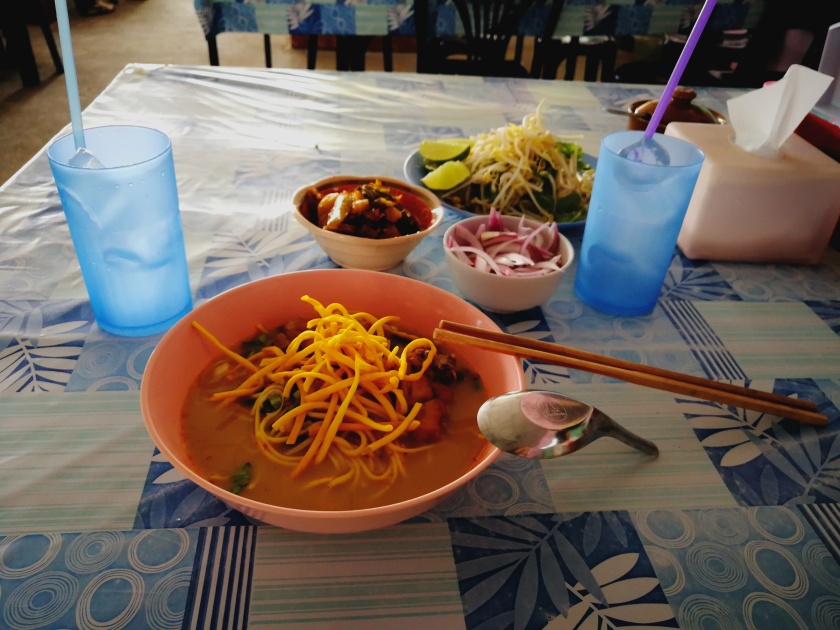 After lunch we drove to the town of Mae Sai at the very border with Myanmar. Dino said that Thai, Burmese, Indian, and Chinese people live here, and everyone gets along very well: Muslims, Buddhists, and Christians. In Mae Sai we visited a jade shop and walked past a street market, which, apparently, Dino himself was much more interested in than we were. 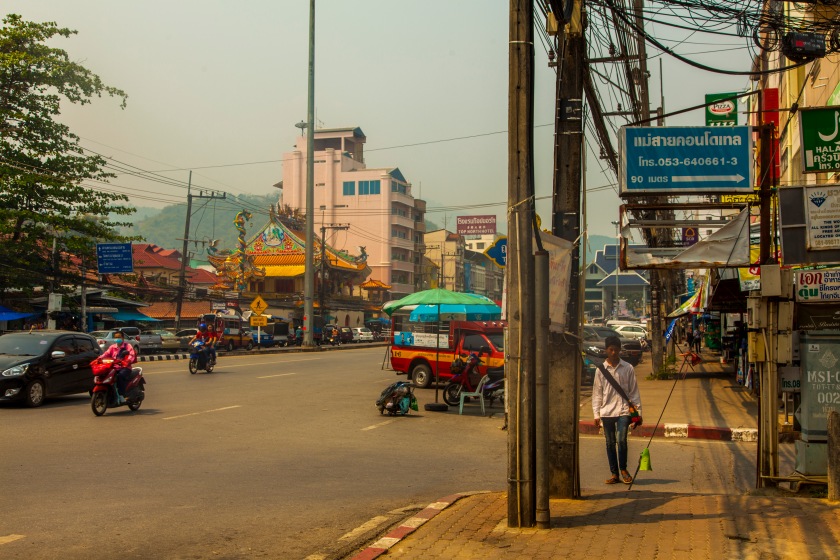 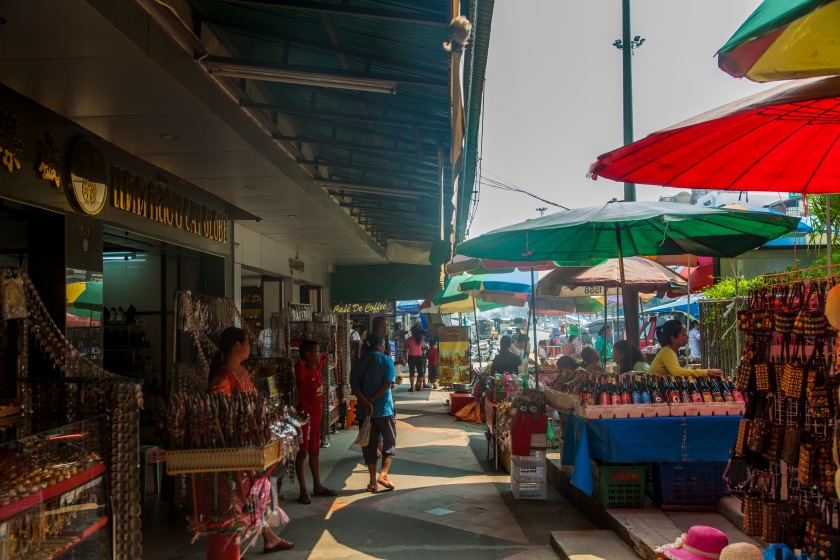 But what was really interesting to see was the gate separating Thailand from Myanmar. We asked, how far away from here the Golgen Triangle was – that is, the place where the borders of Thailand, Myanmar and Laos meet. We were told that it was a 35-minute drive, for which we’d have to pay extra to the driver and that we’d still need to get permission to get on a Mekong tour boat. 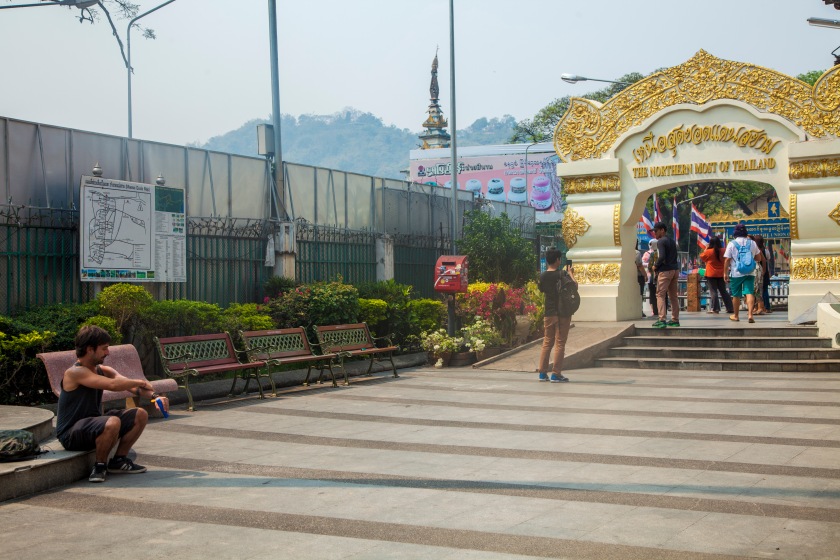 We decided that we didn’t want to go there and headed back to Chiang Rai. Once back at the hotel and left to ourselves, we went straight to the swimming pool, which we’d been drooling over for two days now. But it was no coincidence that the area around the pool was completely empty all the time, which we were really surprised about. The water turned out to be so icy cold that I could not even dip my toe in it, let alone get in there.

Mission unaccomplished! But we went again to get a wonderful massage in the same parlour as yesterday. There are plenty of such parlours on our street, but as we already tested this one yesterday and were very happy with it, we saw no point in looking for something else. And after the massage, as we were intending to go for dinner, we accidentally spotted a cat in the window of a small coffee shop, and then many more cats. We’d noticed this coffee shop, called Cat’n’Cup, yesterday, but somehow didn’t realise that it was a cat cafe. So how could we resist going in to have a frappe and to pet some furry purring felines!

Well, the latter actually turned out a bummer: we were still smelling of massage oil with a citrus aroma, which by cat standards meant that we were stinking sickeningly! So they avoided us at all costs, although we did see one or two curious faces on our table!

Then we went to have dinner in an open-air restaurant, right around the corner from the night market. It was a very pleasant place, and next to it there was a stage, from which we were entertained first with Chinese music, then with English-language guitar songs, and finally with Thai dances.