Our Vietnamese trip began last night, when we left Baku for Doha and from the latter, after a 2-hour connection, flew straight to Ho Chi Minh city. The flight, albeit a long one, felt okay, in many respects due to being an overnight one: we literally got on, sat down, went to sleep, woke up – and suddenly it was already brunch time with just two hours remaining.

In general, everything went pretty smoothly, even though getting the visa took ages. First, we had to fill out a long form asking about everything one could possibly ask about, including religion and information about family members. Then we handed the documents to the officer and were asked to wait. And wait. And wait again. In total, the waiting time was less than an hour, but it felt like eternity.

We were anxious that the travel agency representatives wouldn’t wait for us, but obviously they were aware of the speed of the visa issuing process, so of course, our fears were groundless – we were greeted by a nice lady called Phuoc, picked up by an air-conditioned car and taken to the travel agency office to settle the outstanding payment balance. On the way, she showed us some flashcards with basic phrases in Vietnamese and told us about the history of Ho Chi Minh city and how it was only in the 1970’s when it was called so, because its previous name, Saigon, was too reminiscent of the Vietnam war. By the way, the name Saigon, as per Phuoc, is the modified form of the old Khmer “Prey Nokor” (yes, yes, don’t be surprised!), which used to be the name of the city in its pre-Vietnamese (i.e. Cambodian) times.

The office turned out to be a small room with a couple of computers, piled with boxes and smelling of mothballs for some reason, where we were warmly welcomed, served iced tea, handed an ancient Nokia with a local sim-card to stay in touch with them, and, of course, charged the outstanding payment. Overall, for the time being, it feels like the agency is taking good care of us!

Then we were brought to the Lavender Boutique Hotel, where they left us – nothing is planned for today and we have the evening free. So after freshening up, we went out to explore the surroundings and get some dinner. The moment we stepped out into the street, we felt like in a bath – the air temperature is about 30 degrees Celsius and it’s very humid. The vegetation around is quite tropical with lots of greenery, palm trees, etc.

Walking around proves to be very, very difficult. Firstly, one must take into account the crazy traffic: most people here don’t drive a car, but a scooter, which there are lots and lots of. And if car-owners at least follow some traffic rules – that is, stop at the red light and before zebra crossings – you can’t expect the same from motorcyclists, so you have to manoeuvre between them literally risking your life! They even drive on sidewalks! Secondly, the sidewalks themselves are tiled pretty badly – chicken soup to our Bakuvian souls! – and are very uneven. And thirdly, the sidewalks, which aren’t very wide anyway, are clogged up with all sort of things: parked motorcycles, low stools with people sitting on them, street food and fruit stalls. And very specific scents are exuded both by the food and the fruit, as among the latter, durian dominates confidently with its unique smell, and it is at every corner! 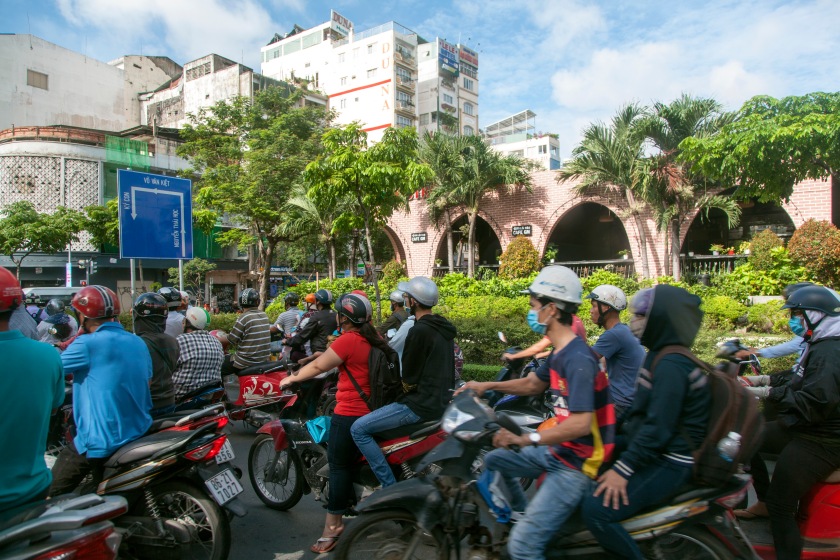 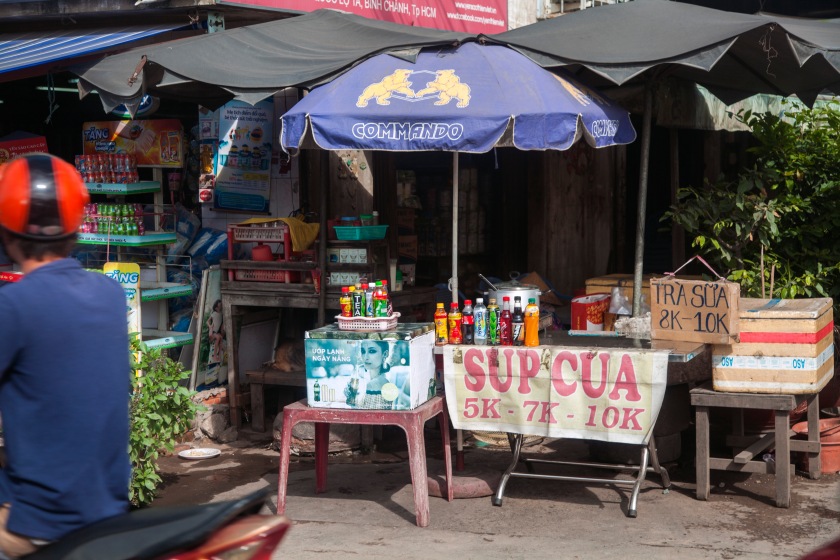 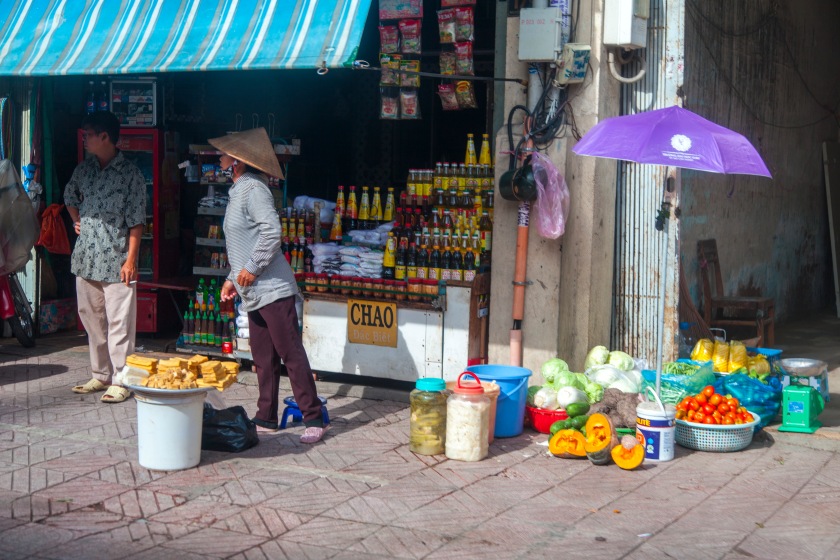 Among all this unglamorous disorder, we discover a nice-looking restaurant, where, as we can see through the window, most customers are Vietnamese but there are some foreigners too, which we perceive as a good sign: the place is, therefore, not very touristy, but still foreigner-friendly. We tried local beer, some drink made of aloe vera with chia seeds and rice noodles with pork, cucumbers, peanuts and something else, and everything was tasty. And it all cost us less than 15 USD for two!

After dinner we tried to walk to the Saigon River, which was supposed to be nearby, but had to give up as a terrible shower started pouring and didn’t stop for a good half an hour. Our Singapore raincoats, which we’d prudently taken with us, came in handy, but didn’t help much – we still had to wait under canopies every time the rain intensified (that is every 5 minutes), until we finally got our feet so wet that we decided to turn back, almost making it to a fancier-looking area than ours. The people here are obviously accustomed to downpours, especially since now it’s the rainy season – everyone has raincoats, huge umbrellas, even scooters are covered with waterproof covers. While waiting, by the way, we walked into a shopping centre selling clothes, which even smelled of cheap clothes – not a sight that can surprise us, who had seen the Baku street markets in underground passages. 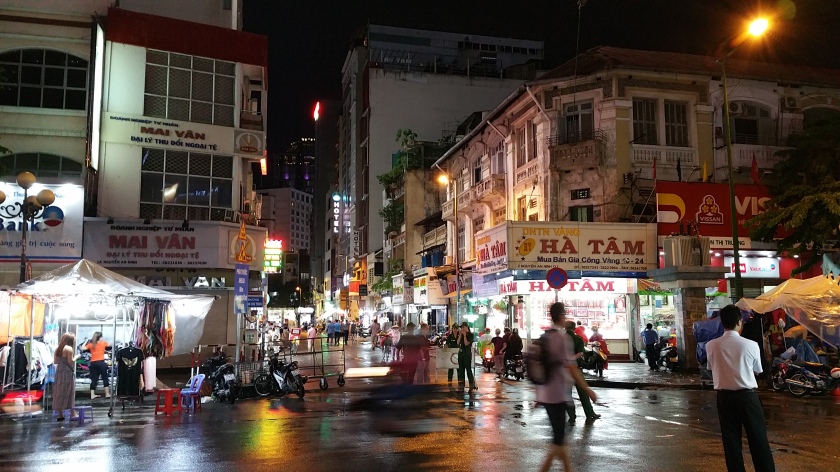 So here are my first impressions of the city: very colourful, much poorer than the previously seen Asian cities (such as Singapore or Hong Kong or Shanghai), scooters swarming all around and everywhere smells of durian.