This was my most idle day in Paris. I was going to meet a friend for lunch, and didn’t know how to kill the time before that. I couldn’t really go anywhere as my ankle still hurt. When I saw 12:00 on my mobile, I started getting ready, but then, giving my watch a glance, realised that I somehow managed to change the clock not one hour, but two hours ahead, so it turned out I had an extra hour to kill!

When I arrived to the place we agreed on (near the metro Bastille; while getting there, I saw the Canal Saint-Martin from the train window, where Amélie Poulain was throwing pebbles, not sure where exactly – the channel is pretty long), I had to wait for my friend for an hour! It turned out that she was coming by car, and not by metro, in order to save time, and it turned out even worse – some roads were closed.

But at least, on her way she called the Latin American restaurant “Barrio Latino” we were intending to go to, and made a reservation (we found out that you had to make one to be allowed in). So there we went, and we had a very good time. The restaurant was absolutely packed, because on Sundays, those who took a brunch buffet were offered free salsa lessons. We were sitting on the second floor, watching people dance downstairs.

As for the rest of the day, I had to spend it in my hotel room – all my friends were busy this evening, and I still wasn’t able to walk by myself.

My last day in Paris – hopefully, the last one this time. In the morning I rushed to buy some makeup, and also chocolates for my colleagues in the office (my ankle was doing much better). The weather was very good, and all the beggars had gladly poured into the streets. Speaking of beggars, I didn’t mention earlier that there were a lot of them here! Some of them just sat quietly and peacefully in the streets with signs saying there were hungry, and always with pets (mostly dogs, although I once saw a cat too). I don’t quite get the point of this, probably they have those pets for company, or maybe the sight of a poor hungry animal is intended to soften the Parisians’ hearts more than that of a poor hungry person. And some others keep constantly pestering you in the street, coming up with different tricks – just like that scam with the ring that we had had the pleasure to witness and take part in.

So, after shopping, I decided to visit Versailles, especially that the weather, as I said before, was good. But, as a Ukrainian proverb says (I couldn’t find its English equivalent anywhere), if a poor man is going to get married, the night will be short. In the beginning everything was going fine. I took the metro to Saint-Michel, then changed to RER to Versailles – and there I went, admiring the beautiful scenery along the way – the suburbs of Paris are much greener and more picturesque than the city itself, especially with all the flowering trees!

Once in Versailles, I decided to have lunch first. The waiter in a local restaurant was just bursting with compliments – ah, “princesse”, etc.

After lunch, I walked to the palace, and once in its territory, paid attention to the suspiciously small number of visitors for such a famous landmark. My worst suspicions were confirmed when I went to the ticket office: “Le château est fermé le lundi” (“The castle is closed on Mondays”) – read the sign categorically. Who would have thought that it might be closed on a day like Monday! I should have checked though…

But at least, the park and gardens were open, of course. I wasn’t really up to walking around on foot, but luckily I noticed a little train running through the territory. The ride on the train was very enjoyable – the sun was shining, there were beautiful green lawns and sheep everywhere.

Having made a full circle, I went back to the station, and returned to Paris. But before going to the hotel, I went to Montmartre to see and photograph the Moulin Rouge! And in the evening I met some of my French friends. 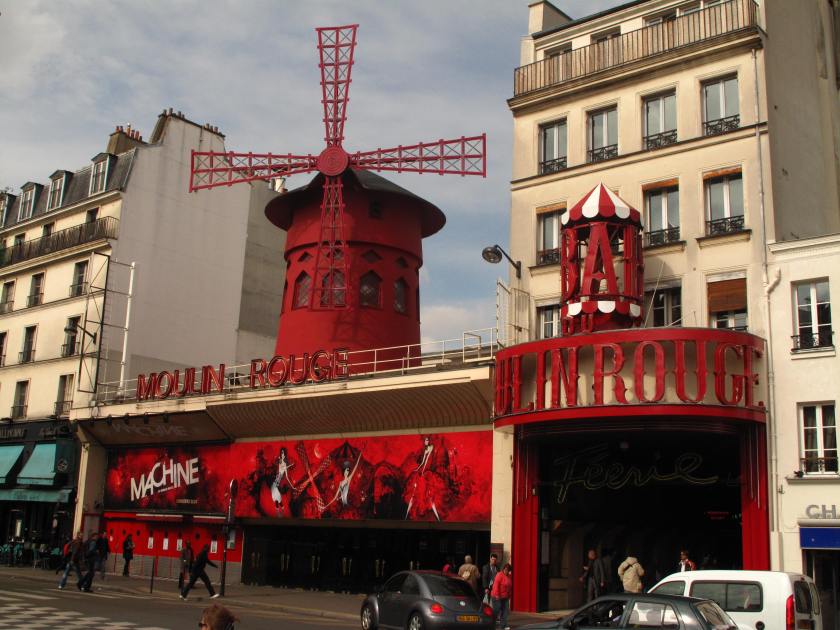 Overall, I liked Paris a lot. It’s true that I didn’t have to deal with any local crime or the local bureaucracy. But still, it’s a wonderful city, and I hope to be back some day!