Today we visited the Beijing Zoo.  As we had scheduled the Kung Fu show for the evening, we decided not to spend more than 3-4 hours at the zoo. Therefore, we acted on the same principle as once at the Louvre, where, first thing, we had checked out the Mona Lisa and then viewed whatever we had time for. In this case, first of all we headed for the giant pandas. It should be mentioned that all the “Mona Lisas” of the local “Louvre” were sleeping like logs during our visit! 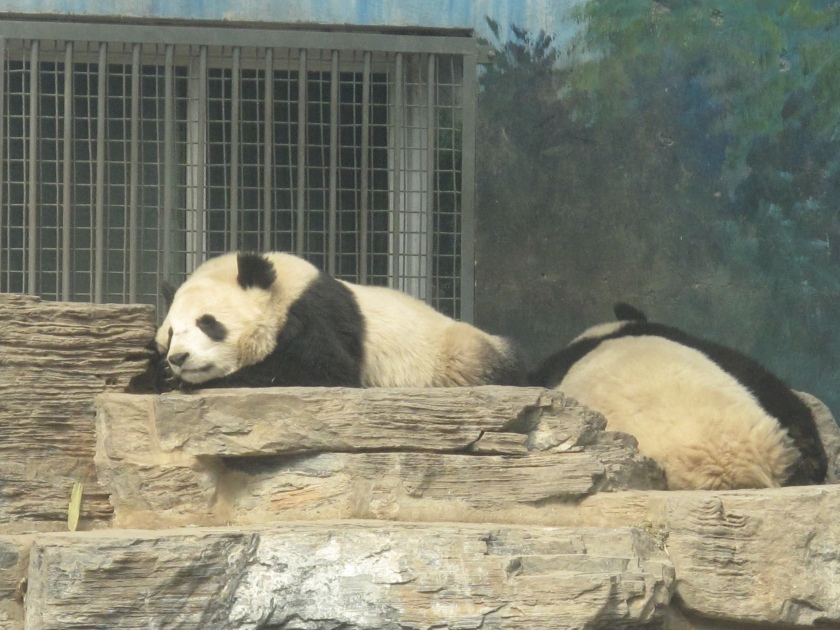 Signs of at least some activity were only shown by the very first panda we saw. It was calmly eating bamboo leaves, but then again, having completed its meal, it lay down to sleep. But anyway, those big cute animals looked very sweet! 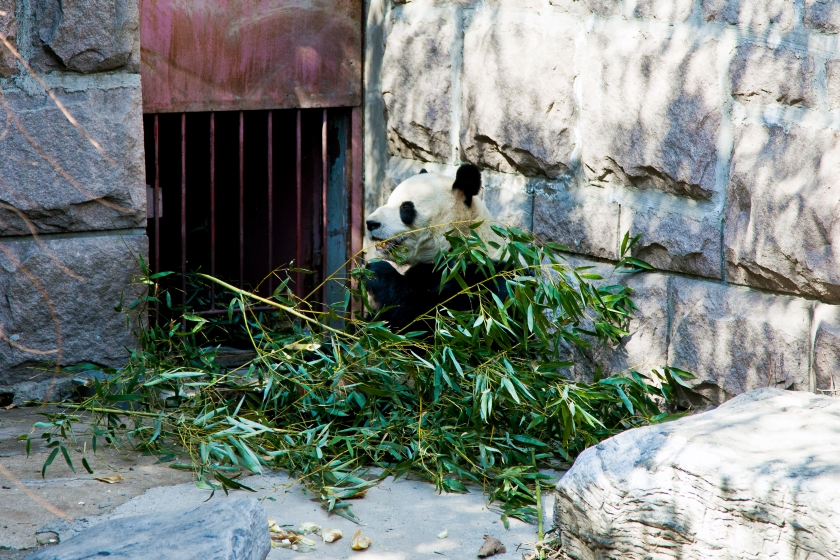 The same thing was observed of the small (red) pandas: only one of them was eating something, while the others were sound asleep, sprawled in the branches. Actually, the entire zoo seemed like a big Land of Nod. The wolves were asleep, the bears were asleep, the jaguar was asleep… However, the lion and the tiger didn’t let us down. Apparently, the usual desire of all cats to show off played its role. While other animals tried to hide from spectators in the most inaccessible corners, the lion and the tiger, on the contrary, specially lay down on the most prominent places and struck majestic poses. We managed to take a photo of the lion while it was stretching! 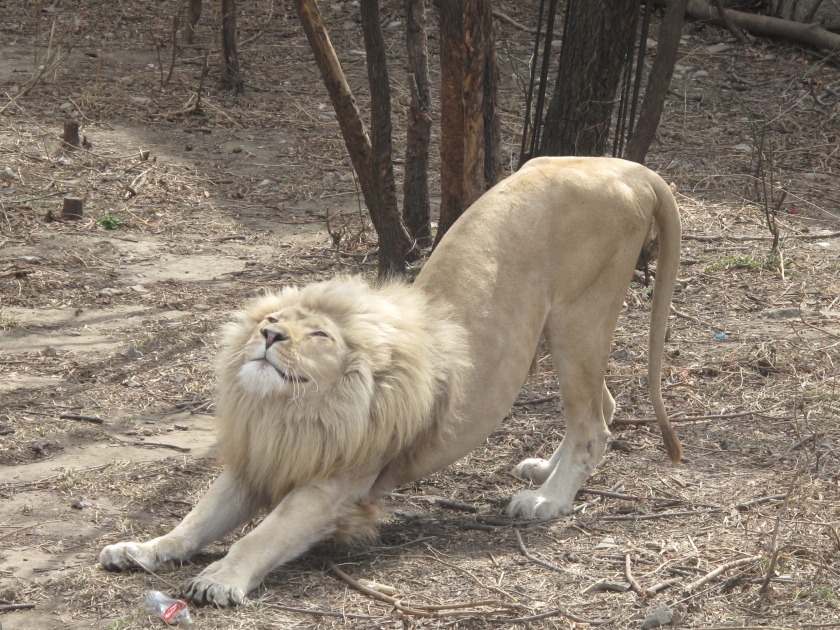 Of course, the zoo was very busy; after all, it was a Saturday. We finally saw a lot of Chinese children (there are not too many of them on the streets). They were all chubby and rosy-cheeked, very cute!  It was a big surprise to see a lot of girls. Clearly, the desire to give birth only to boys, resulting from restriction on the number of children, has significantly decreased, at least in the capital. Perhaps, this is the consequence of the prohibition to determine the sex of the child before birth. At times we saw rare couples with two children (probably, well-off people), but never with three.

By the way, – that’s already another story – we also never saw any foreign guides. In Europe, a French-speaking group of tourists, for instance, would have a native francophone guide, the same about the speakers of other languages. In China, though, it seems like for any language requirement there is a corresponding Chinese person available. Even the text for the audio guide in Russian, mentioned earlier, was clearly recorded by a Chinese woman. Another point is that, all the TV channels, whether they are in Russian or French, are in fact Chinese, show news about China and the TV presenters too are Chinese! For example, a thin Chinese guy with glasses, giving the spiel in fluent Arabic from the screen, made an indelible impression.

The zoo was, indeed, huge, but we decided to leave out other animals, such as giraffes, anteaters, elephants, as we had seen them many times before, and they were not among our most favourites. The same can be said about the aquarium – only a few months before we had seen a very beautiful one in Bergen, Norway.

We got to eat something quite late, because most restaurants here serve food strictly at certain hours and are closed all the other time. So, if you feel hungry, say, between two and five o’clock in the afternoon, you can hardly find anywhere to eat. As a result, we combined lunch and dinner. And that was a good idea! We tried out the Japanese restaurant in our hotel. Not being quite sure what was what in the menu, we selected Teppanyaki course which was a set meal. We even thought that it was surprisingly expensive (300 RMB), but as it was our penultimate day in Beijing, we decided to still go for it.

And – oh my God! – it turned out to be an eight-course meal!!! The waitress just kept bringing and bringing plates, bowls and salad-dishes. From the menu description it wasn’t really clear that we would get that much: appetisers (salmon roe, a snail and some sort of jelly), a salad, miso soup, a fish dish, a beef dish, a rice bowl, grilled vegetables and fruit! Even when the waitress had already served all our food, we winced every time she appeared in sight with another tray, and sighed with relief when she passed by. And it was impossible not to eat everything – the food was incredibly delicious, perhaps the best of all we had eaten here. Our noble diet plans must have come to nothing after such a nosh-up. And the prices seemed not so high after all – where in Baku could one have such an abundance of delicious food for just 38 AZN (appox. 48 USD)? 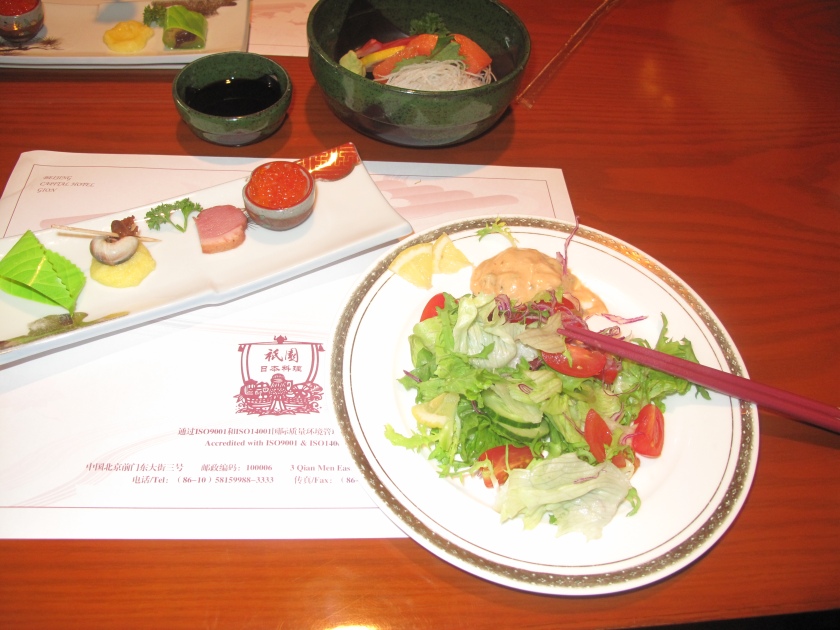 In the evening, as already mentioned, we familiarised ourselves with Chinese martial arts, i.e. watched “The Legend of Kung Fu” at the Red Theatre. We had very good seats in the ninth row, numbers one and two – not at the edge, as one would expect, but right in the middle. Odd numbers were counted to the left of number one, and even numbers to the right of number two. Most of the spectators were foreigners, and the performance was in English with Chinese subtitles on the screen (while the Buddhist mantra “Oṃ maṇi padme hūṃ” didn’t require translation). Although one would think that a performance like this should be particularly interesting for men, and despite the imposing price of tickets for our row, the man sitting next to me slept through the whole performance.

The plot was rather simple: it was the story of a boy who entered the monastery to study martial arts, about his life, temptations and achieving the highest level of enlightenment. But the performance was very impressive and colourful, combining elements of ballet, pantomime, circus and opera. The actors did an amazing job, sometimes it even was impossible to distinguish imitation from real Kung Fu skills: the main character lay on swords, broke metal bars over his head, smashed bricks over his chest. So what was it – a sham, an illusion, or did we see a true master of Kung Fu in front of us?

The Chinese wouldn’t have been Chinese, if they hadn’t demonstrated their exceptional get-up-and-go. Apart from selling souvenirs with logos of the performance at the foyer, they also organised an opportunity to take photos with the artists for 20 RMB. We were among those who went for this opportunity – while had it been free of charge, we probably wouldn’t even have thought of doing so! 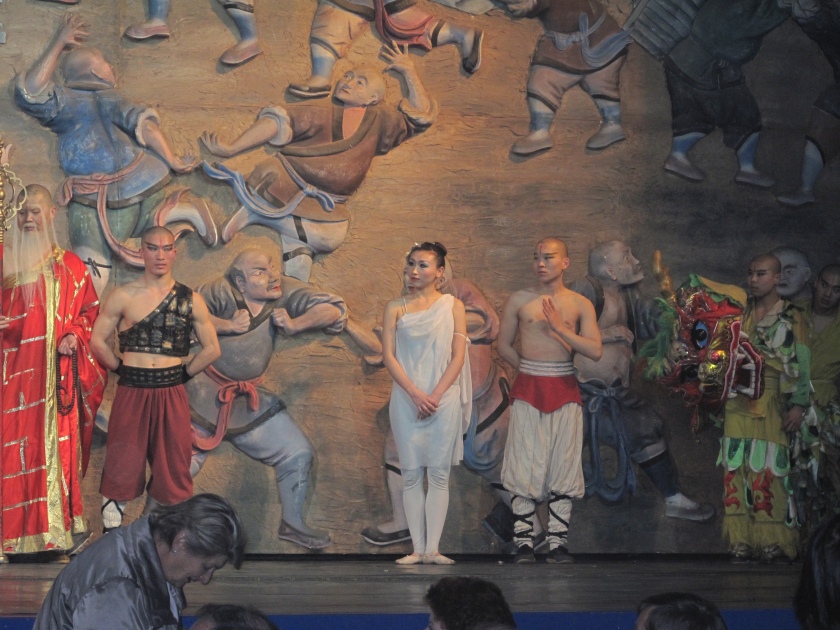