To begin with, the Forbidden City, listed first among the must-see sights of Beijing, did not impress us that much. Spoiled with places like the Louvre and Schönbrunn, we expected that we would be allowed in the imperial appartments to marvel at their decorations, furniture, utensils and clothing of the emperors and their family members. Instead, we found ourselves on a huge territory without a single tree (or a bush, or even a grass blade), paved with stones, dotted with pavilions of the same type – very similar to those we had already seen the day before, in the Temple of Heaven complex. Of course, there are all sorts of artefacts, more or less divided among several galleries (art, ceramic, bronze), but Chinese museum art isn’t generally a surprise for us, as we have repeatedly seen it in various museums – for example, not long ago there was a wonderful exhibition of imperial clothing in Victoria and Albert museum in London. 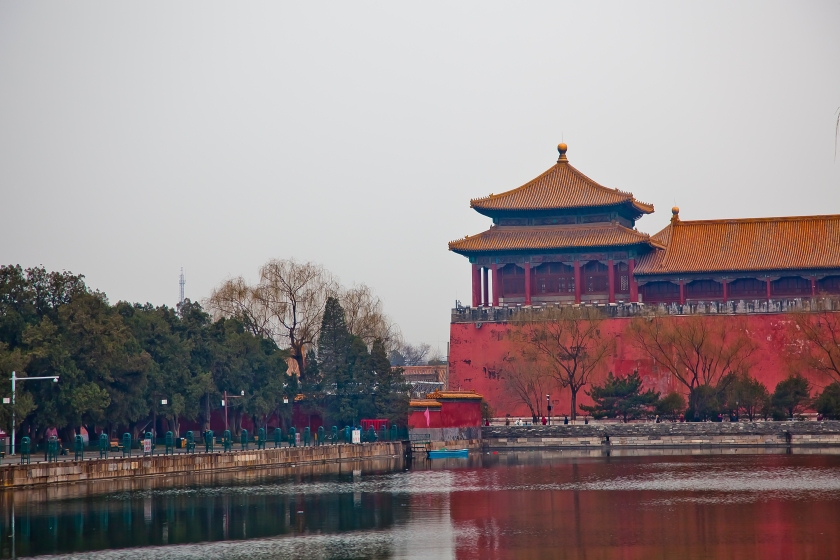 Crowds of people, mostly Chinese, were traversing Gugong – that is how the imperial palaces complex is called. 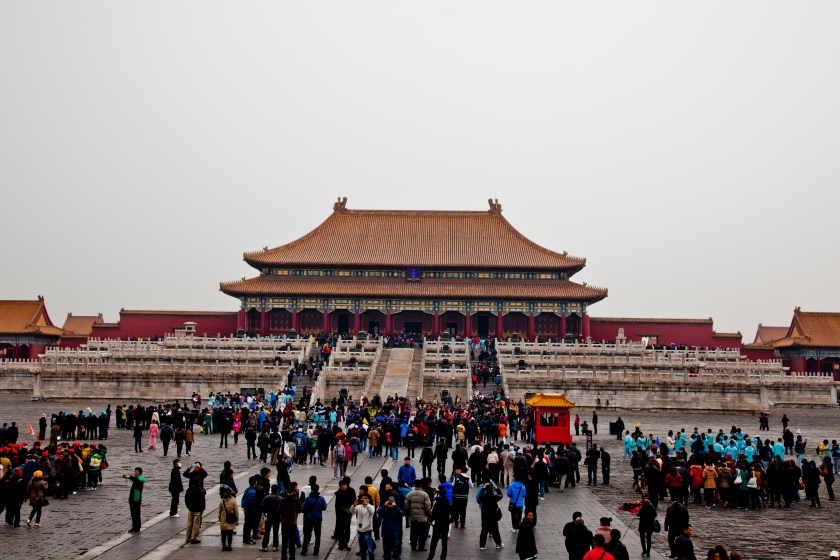 It’s worth mentioning that amateur tour guides, attracted by our foreign looks, eagerly attacked us on the distant approaches to the complex, offering individual tours. But we, remembering the previous day’s unfortunate experience with the private sector, firmly refused.

By the way, just outside the complex we observed a funny scene. A loud bellow from a policeman, getting out of a car, made two stout women in galoshes and with voluminous bales full of stuff for sale (obviously illegal sale!) flee headlong, while their younger and suppler companions were walking on all fours, hiding from the guardian of order behind the balustrade.

So, back to the Gugong. The crowds were moving strictly from south to north, peering into the open windows of the main pavilions, the interior space of which still remains forbidden to people. It is, however, no wonder – these millions of visitors would otherwise just take down the quite small halls. As for the western and eastern pavilions, their doors and windows were firmly locked. We deviated from the north-south axis just once, to visit the treasury. Alas, here too we were slightly disappointed, because the treasury was quite modest: a few trinkets in coral and jade did not hit the eye or imagination.

Interestingly enough, although moving among an avalanche of people is not that easy and even gets on your nerves, at the slightest deviation to the side, to emptier and more desolated places, you immediately start feeling uncomfortable.

Speaking about unattended places, there are quite a lot of them both on the left and on the right, because the collectivistic Chinese are not likely to disperse across the territory. Generally, this collectivism is observed everywhere. This is evidenced by previously mentioned collective dances and exercise in parks. The necessity to act as a group had also been symbolically showed in the Lao She teahouse the day before: at least three performances demonstrated a tremendous coherence of actions. Another peculiarity we noticed was related to, excuse me, public toilets. Most of the stalls in those consist of squat toilet; however, there are always a couple of stalls with good old seat toilet. By the way, there are public toilets pretty much at every turn; they are free and fairly clean. Yes, the prose of life indeed, but still a very important issue for a travelling person.

Once again, back to the Gugong. Of course, it is possible that we could have missed something interesting, but nevertheless, upon reaching the northern gate we firmly decided not to go deep somewhere else, but to return the now habitual automatic audio guide and go back to the hotel. The latter didn’t work quite smoothly: the sidewalk was separated from the taxi stand literally by triple fencing – so near and yet so far! As we tried to squeeze through the passages to the roadway, we were attacked by trishaws and moto-rickshaws. Of course, we gloatingly replied: “No, thanks!”, but it didn’t make our passing any easier. The taxi drivers here also seemed not as quiet and law-abiding as those carrying us in the morning from the hotel. They were haggling, trying to overstate the price, and taximeters were apparently out of question. Finally we reached an agreement with one of them, not as greedy as the others, and drove off. The driver surprised us first with his English (something which you hardly ever come across here), and then, with the fact that at some point, stopping at a red light, he pulled out a thermos from the glove box, poured a cup of steaming jasmine tea and drunk it with pleasure.

Despite the fact that we were driving through much more interesting and colourful streets than the day before, our general mood was not so good. We didn’t even want to go out at all after lunch. But then we almost forced ourselves to go visit two places: the Beihai Park and the Donghuamen Snack Street. And this time it turned out an epic win, we enjoyed it a lot! 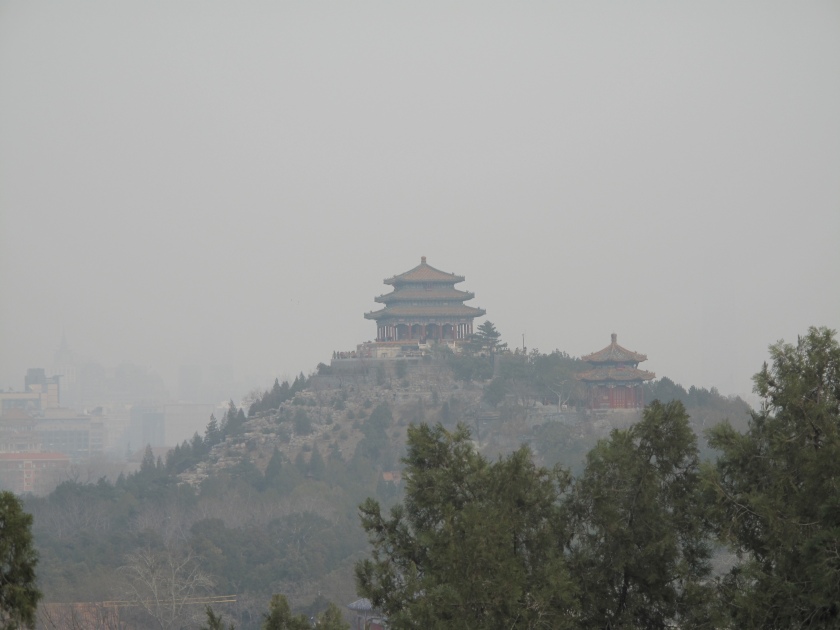 Clearly, the Beihai Park must be absolutely charming in summer, when, as we saw in photos, willows dip their green branches into the waters of the lake, reflecting the bright blue sky. But even on such a dull March day the evergreen part of the park looked beautiful and was somehow compensating the bareness of the willows. In the centre of the park there was a hill, crowned with the White Pagoda. Luckily, we didn’t make detours to get to the Pagoda, but walked through all the pavilions, in the very first of which we saw the magnificent statue of Buddha Shakyamuni. The trees in courtyards in front of each pavilion were covered with red diamond-shaped wish cards.

On the right there was a tower with a bell, which, as it is believed, should be struck three times for security and prosperity for the whole year. Needless to say, we easily parted with three yuans each, which was the fee for striking the bell. We did then have the dangerous desire to check whether it worked by skipping down the steep and narrow wooden stairs, but managed to suppress it.

As you would expect, the ascent to the Pagoda was very difficult. And even then, how can the way to Perfection be easy? We overcame it without much trouble, though, which cannot be said about one or two women, who couldn’t make it up the stairs. What we found a bit annoying was a Chinese family, pointing their fingers at us and vigorously discussing – us, I believe. Only later, after reading a book on Chinese concepts of culture and ethics, we realised that such behaviour is not uncommon and absolutely normal here. 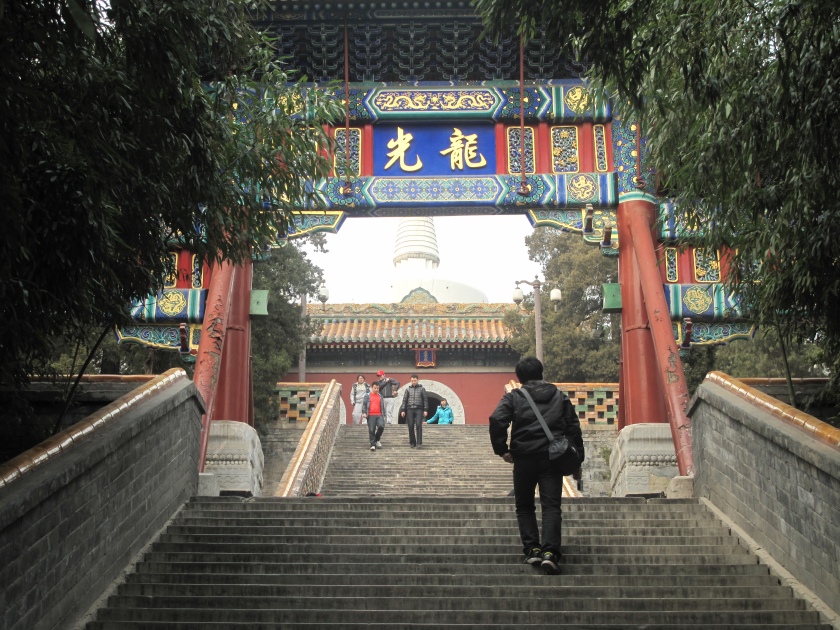 Inspired by the “pilgrimage” to the Pagoda, the wonderful air and the beauty of bridges and pavilions, we decided that we definitely should not miss the next item of our programme.

Thus, from the sublime grandeur of the Pagoda, we moved on to the utterly earthy Donghuamen Snack Market. However, we weren’t intending to try anything there – both following warnings not to buy food from street vendors, and being aware of the very exotic selection: skewered grasshoppers, centipedes, beetles, seahorses, silkworms, worms, snakes, spiders, scorpions, and other creatures, unknown to us.

In their neighbourhood, even ordinary candied fruits, noodles with vegetables and lamb kebabs looked unappetising. Smells along the stalls varied from very pleasant ones (sweet or spicy) to absolutely disgusting malodours. The nasty smell was mainly coming from the raw offal, also skewered, and it should be noted in fairness, that all the arthropods mentioned above didn’t smell at all.

Having checked the map, we realised, that the Wangfujing Street, adjoining the market, was not far from our street – Qianmen – and we decided to walk to the hotel. The distance was, perhaps, quite short, but as we were extremely tired by that time, walking it didn’t seem very easy.