Off we go to another Asian trip, with the same travel agency that organized our Vietnam tour – this time we are in Thailand! After the virtually sleepless overnight flight from Abu Dhabi (toddlers on board are an absolute evil!) we arrived in Bangkok at about 7am, found our way out of the enormous airport pretty quickly and met our guide – an elderly lady named Vanna.

Later she told us that she used to work for a large logistics company, and when she retired at 57, she entered the university and became a tour guide, so as not to sit around. She also learned to swim and play tennis at the age of 40 and driving a car at 45. We found her very nice, positive, full of energy and helpful.

First of all, we were taken to our hotel. Of course, on our way we kept staring around and comparing everything with the last Asian cities we had seen – that’s Hanoi and Ho Chi Minh City. Bangkok looks (and indeed, is) much more developed in terms of infrastructure and economy. It’s a very green city, with lots of tropical vegetation and flowers. 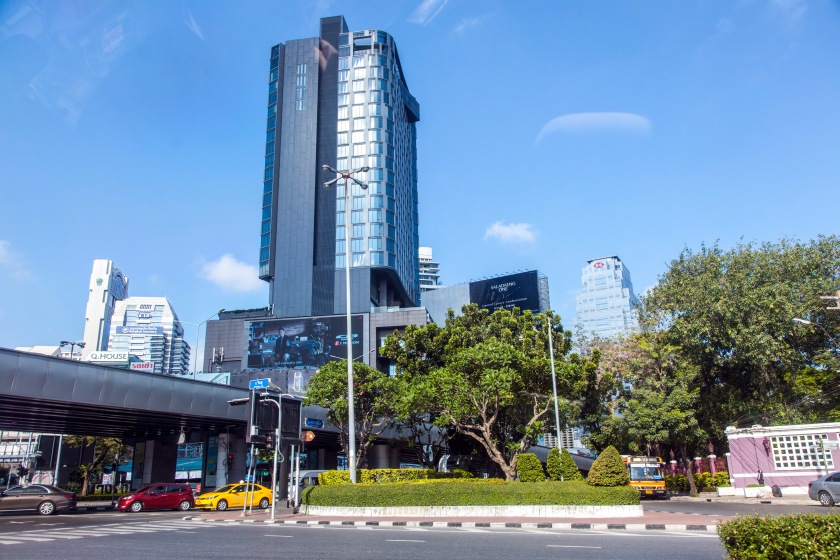 In the hotel we were offered breakfast right away, and it was quite good, but as we understood, unlike in Vietnam, here three stars mean exactly three stars, and you don’t get an abundance of all kinds of fruits, dim sums, sushi rolls and whatever else your soul may desire.

Then we were given 40 minutes to get ready, and right after that we went on a city tour. What immediately caught my eye were photographs of the late king, deceased two years ago, all around the city. Vanna said that he was not just a king for them, but almost like a father, as he cared a lot about the people. For a whole year after his death, the entire nation wore black and white as a sign of mourning – not because they were forced to, but voluntarily.

The first item of our programme was the Grand Palace – a complex of buildings, with temples and pavilions, built in the 18th century. There is a strict dress code on the premises: knees and shoulders must be covered. Given the thirty-plus degree heat, it doesn’t feel extremely nice but is not fatal. What spoils the impression a bit are crowds and crowds of people, mostly Chinese. I wrote this phrase – and felt deja vu, remembering how I had written the exact same thing about the Forbidden City in Beijing. Here as well, 99% of the tourists seem to be Chinese, Vanna said that it gets this crowded all year round, and even worse so during the Chinese New Year. 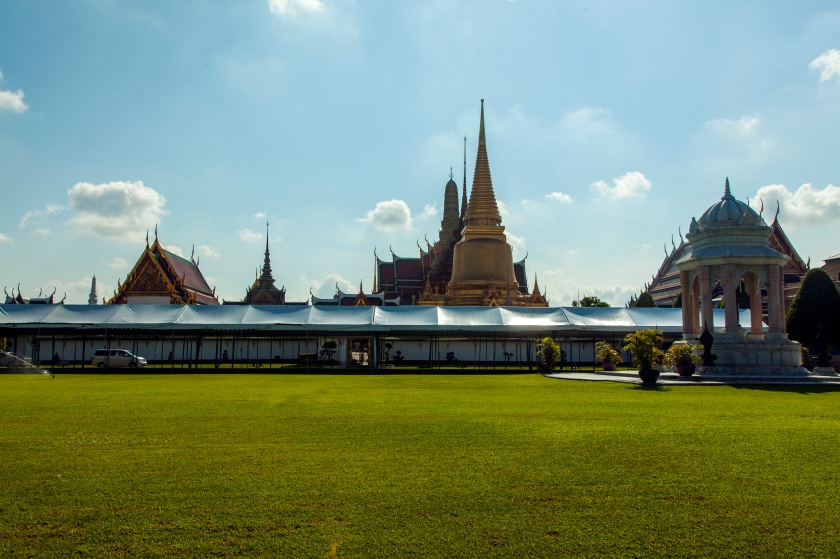 The highlight of the palace complex is the Temple of the Emerald Buddha (or Wat Phra Kaew), where taking photos was not allowed. The Emerald Buddha is actually made from a solid block of jade (as for emerald, it’s not even suitable for carving), his clothing varies depending on the season, which there are three of in Bangkok (winter, summer and rainy season), and it is the king himself who “dresses” the Buddha. In general, the statue is quite small, only 66 cm, and according to a legend, was found in the 15th century in Chiang Rai among the ruins of some pagoda, then transported to Chiang Mai (we are going to see both cities, but at that time they did not belong to Thailand) and to a bunch of other places, before finally making it to Bangkok. The figurine is highly revered in Thailand and even considered the Palladium of the Kingdom, which is said to stand for as long as the Emerald Buddha is in Thailand. 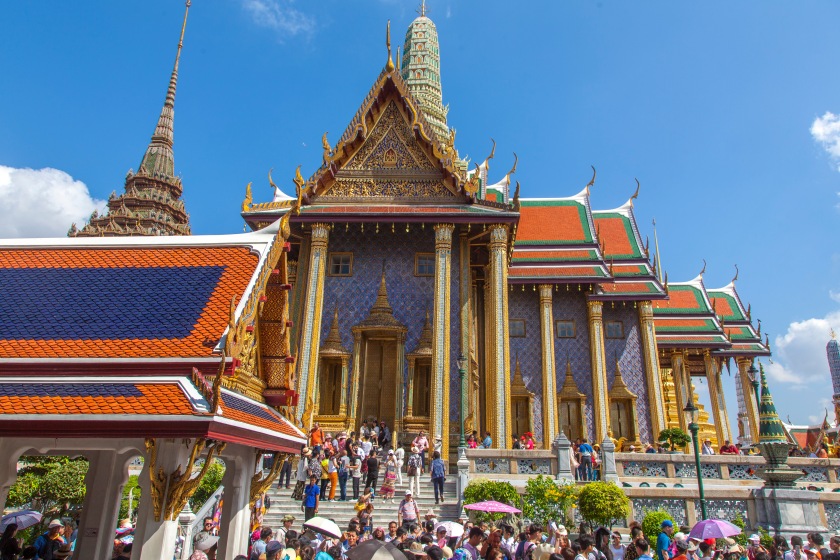 Vanna keeps drawing our attention to elements of the architecture, as we are examining various stupas and pavilions. Everything is made by hand, whether it’s ceiling paintings or porcelain shard mosaic work.

Some buildings are purely in Thai style – this is evident both from the shape of the roofs and the abundance of gold in the finish. Others are in Cambodian style, with more pointed domes and without gold, although also with a very rich finish. There is even a model of the Cambodian Angkor Wat temple. 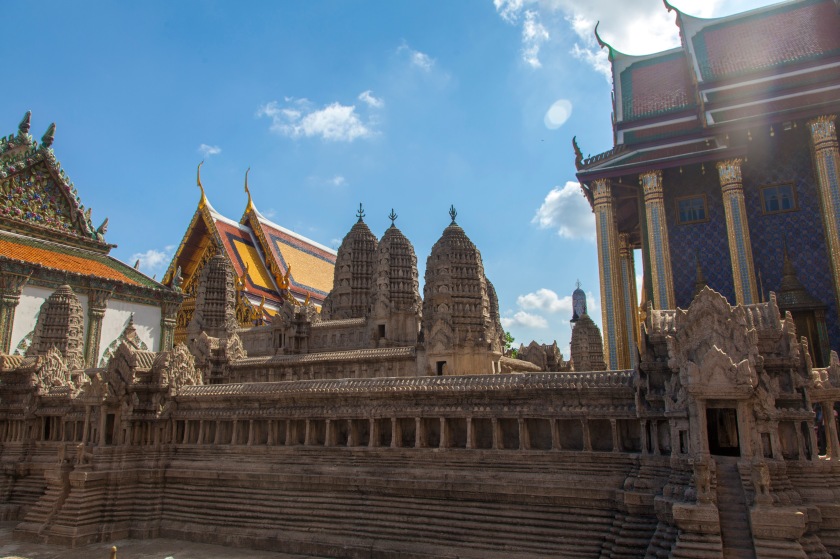 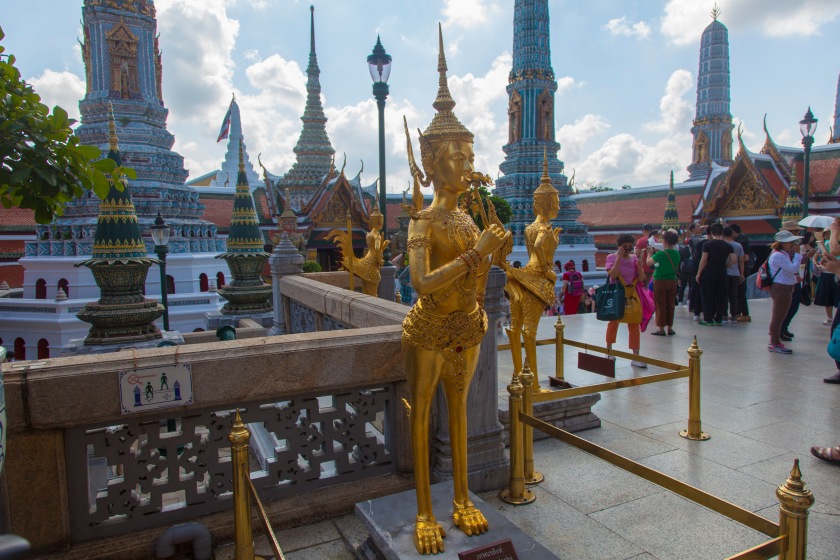 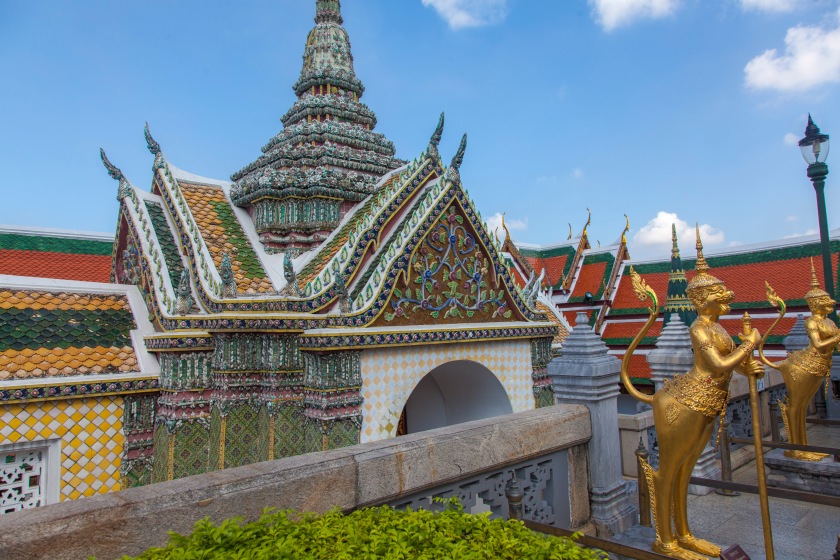 One group of buildings includes a newer palace built in European style in the 19th century – after a European trip, King Chulalongkorn (Rama V) wanted to demonstrate that in Thailand (or actually, Siam back in the days), which unlike its neighbours in Indochina and thanks to Chulalongkorn’s politics, wasn’t anybody’s colony, they could build at the same level as in Europe.

At the exit from the Grand Palace, we saw numerous wall paintings from Indian mythology – in general, Indian influence is largely felt here, even Buddhism seems to be in its Indian form, not Chinese like in Vietnam. 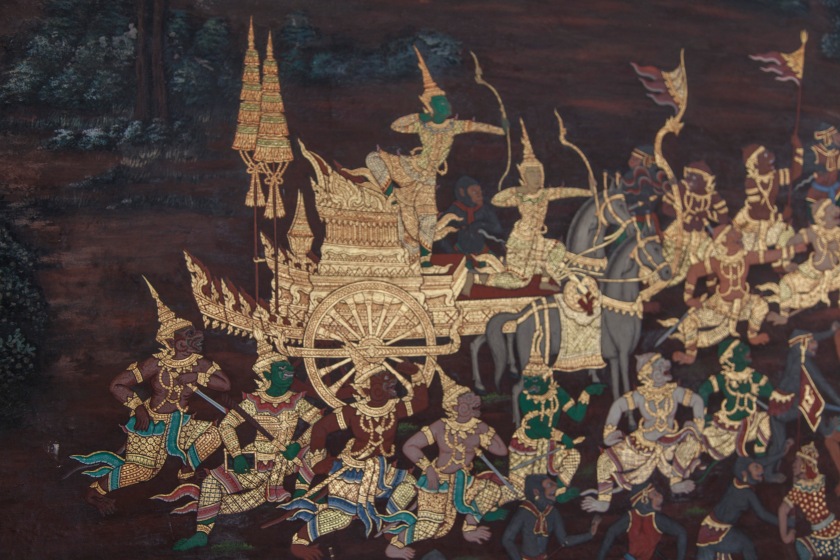 After the Grand Palace we took a boat across the river to the Temple of Dawn (or Wat Arun). Here we saw Buddhist monks, some of whom were young boys – probably novices – having lunch. They are allowed to eat only twice a day and only before noon, and also women aren’t allowed to touch them. 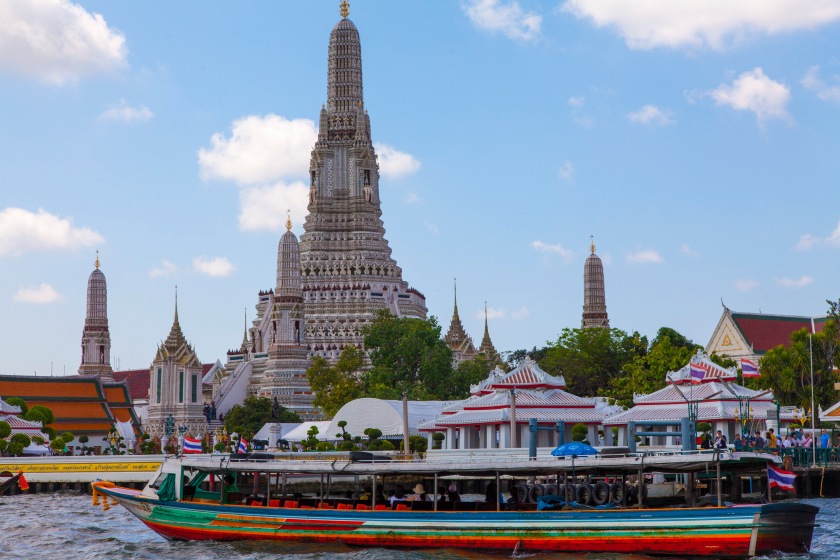 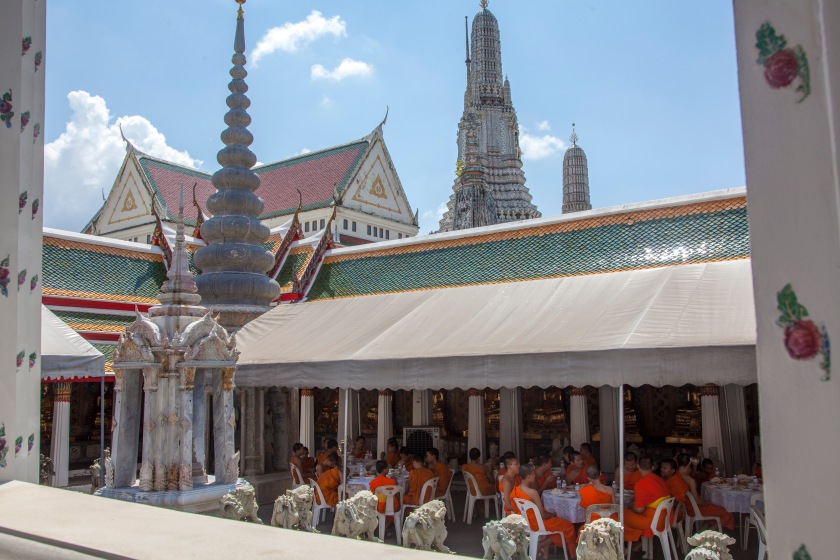 The dome of the temple is in the Cambodian style and also decorated with porcelain shards. Vanna said that back in the days the royal court ordered porcelain tableware from China, and far from everything survived on the way, so this is how the broken crockery was utilised. 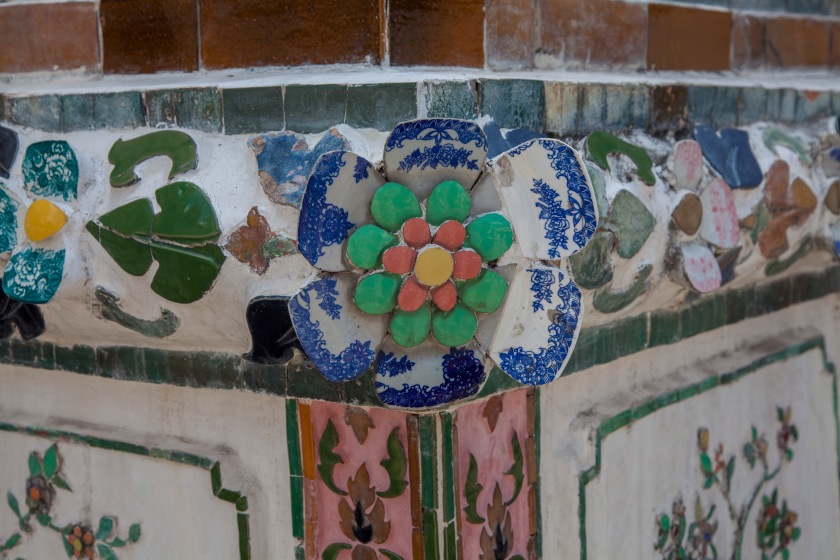 Today’s last stop, not included in our tour programme, but suggested by Vanna, was a visit to a gem factory to purchase jewelry. We bought silver jewelry – gold was either too expensive, or too inconspicuous.

On the way to our hotel, we popped into a restaurant nearby and tasted the local versions of the famous tom yum soup and green curry. Delicious but spicy! And then, after a hearty lunch and a sleepless night, we immediately went to bed and slept for 2-3 hours, until it was time to get ready for the dinner cruise on the Chao Praya River. Vanna and the driver were already waiting for us, and we drove right to the pier.

There were quite lot of people on the cruise boat, but fortunately we had a table on the open upper deck, and not on the closed bottom one (although, perhaps, this wasn’t sheer luck, but rather what our ticket included). The cruise was very pleasant – there were small kerosene lamps burning on the tables, the buffet dinner was delicious, we passed by the Grand Palace and Wat Arun, which we had seen before and which were now magnificently illuminated, and in the meantime we were entertained by the cultural programme: the singer was singing famous languid ballads (including ones in Chinese – probably also famous, just not to us), and then we say a mini ladyboy cabaret show.