Yesterday we felt a bit disappointed that we were staying in this wonderful hotel with a swimming pool one night only, so even though today’s excursion was supposed to start at 9am, we were up at 6.30 already, to have time to enjoy both a lovely breakfast with lots of fruits by the pool, and the pool itself. 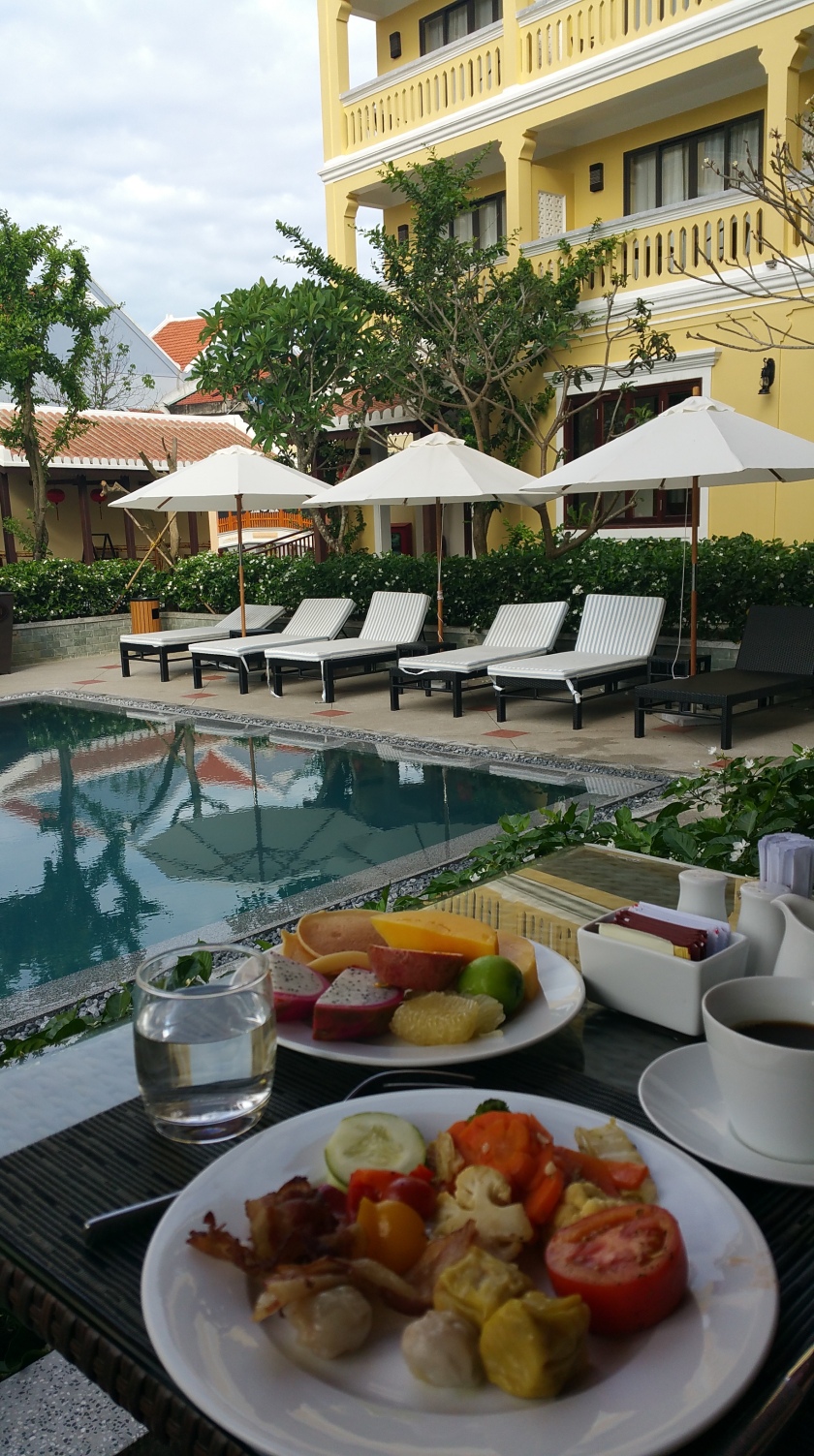 So at 9am sharp we checked out from the hotel and went on a walking tour around the Old Town. We were there last night already, but under daylight the streets look totally different, not to mention that we had explanations this time. 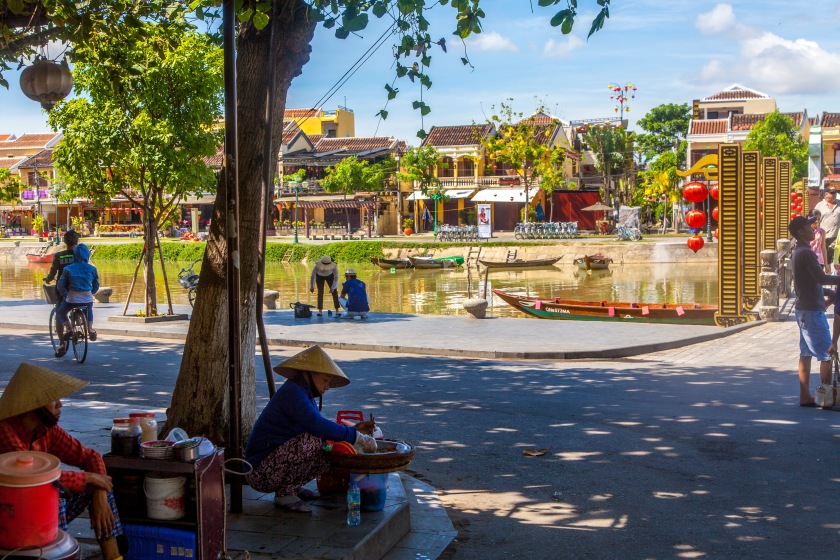 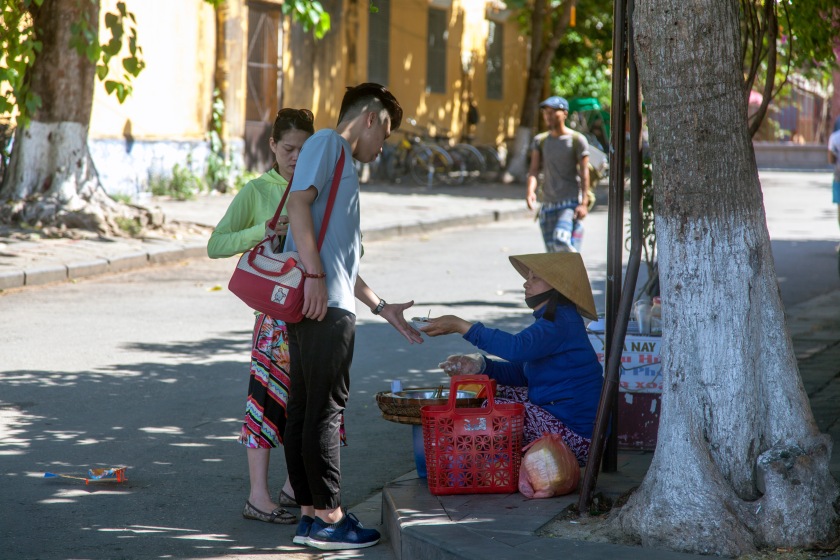 The Old Town is really beautiful, after all it’s included in the list of UNESCO’s cultural heritage for a reason – in fact it’s so beautiful that even the 38C heat and the scorching sun, under which we had to walk for two hours, didn’t spoil the impression the least bit. 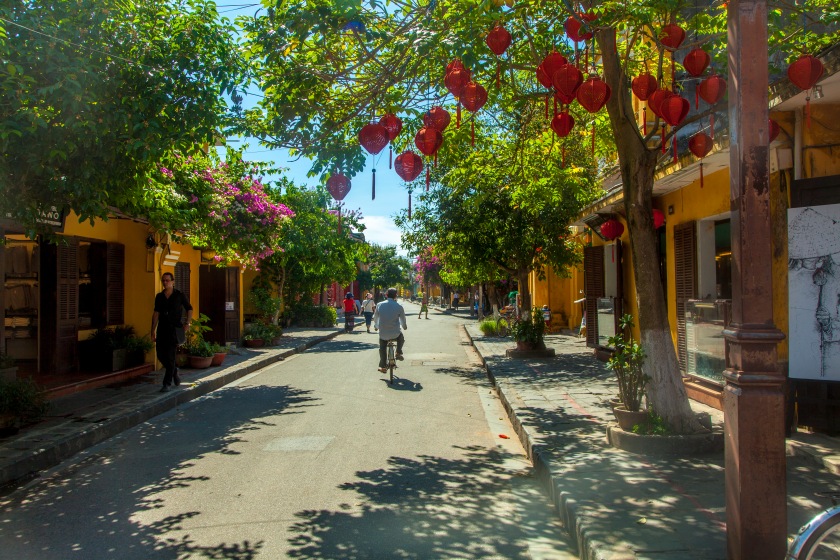 We walked into the Old Town through the Japanese bridge, which back in the days used to separate the Japanese quarter from the Chinese one. The bridge was built almost 400 years ago, and since then is being periodically renovated, especially during the rain and flood season, when the water level rises and floods it. The bridge, just like everything in the Old Town, is decorated with lanterns – white ones, which is perfectly normal for the Japanese, and which, according to Nam, used to cause the displeasure of the Chinese, who consider white to be the colour of mourning.

The Old Town consists of several streets adjoining the Thu Bon river, on the other side of which we can see much newer buildings, but also stylized as old to attract tourists. 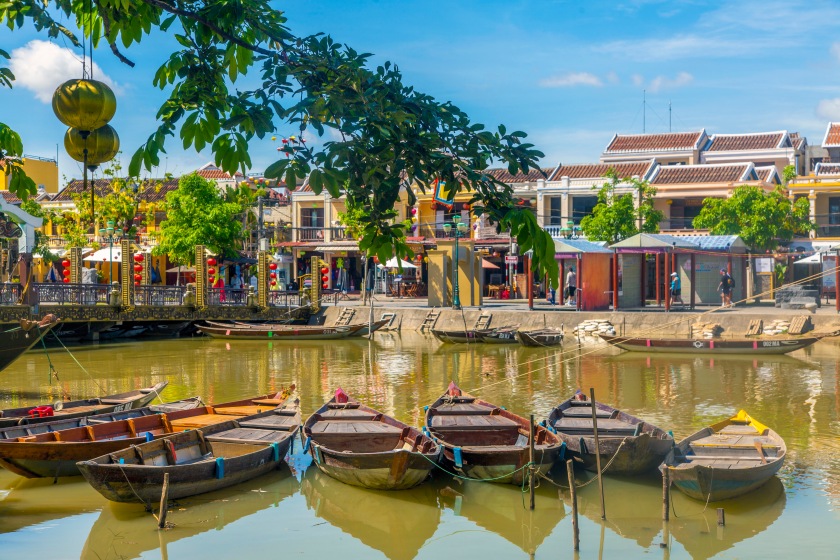 I guess, in the daytime, the streets we are walking around look even more beautiful than in the evening, as the architecture of buildings and pretty blossoming trees are better visible, plus it’s much less crowded, and the lanterns, although not lit, are still there. 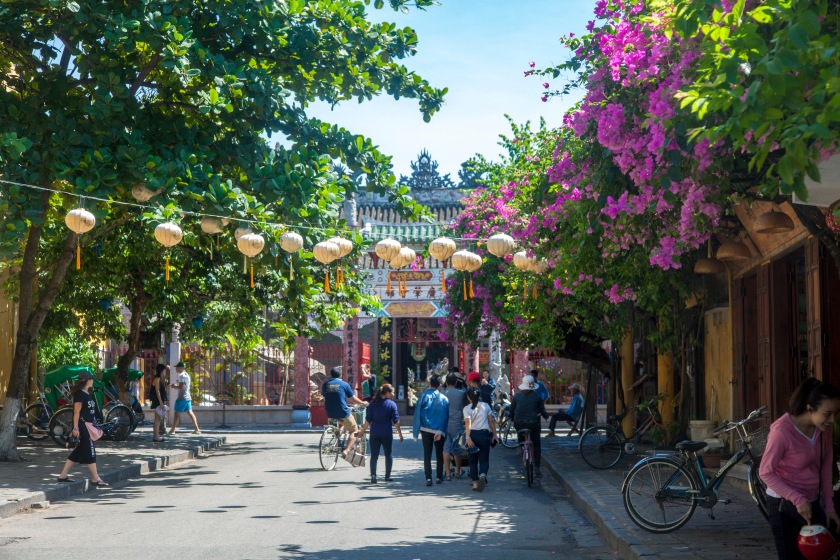 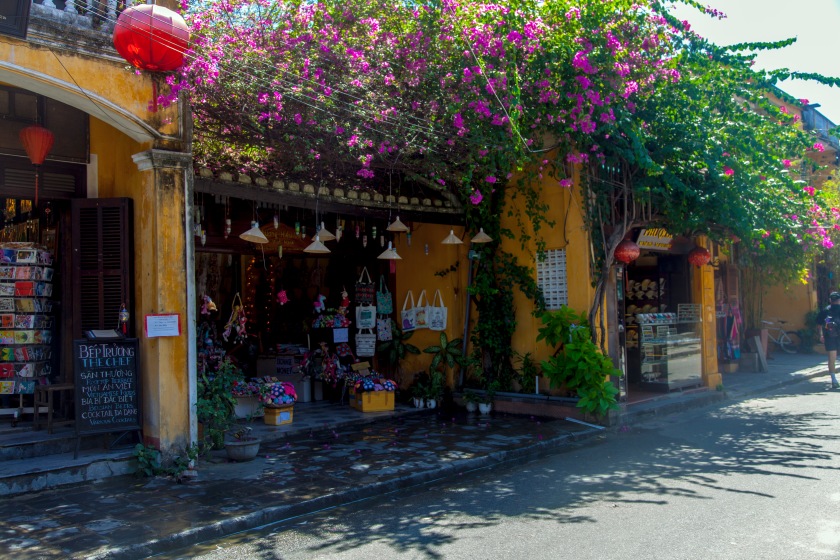 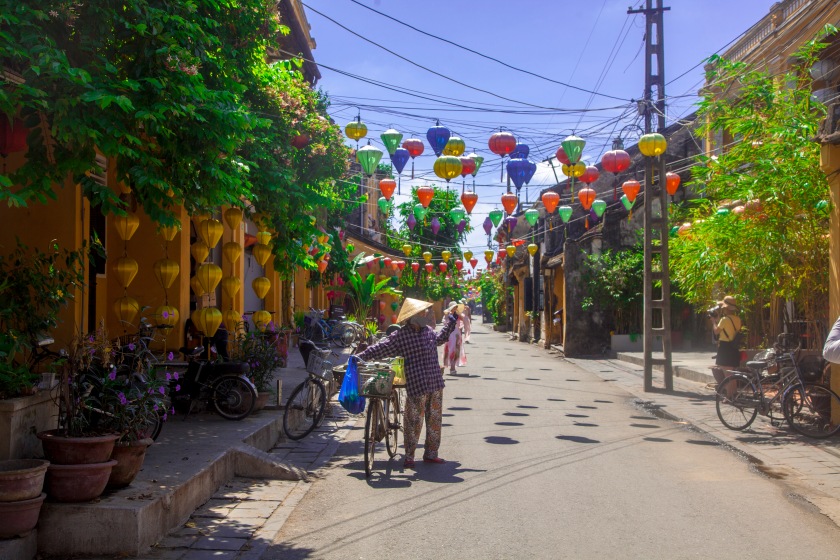 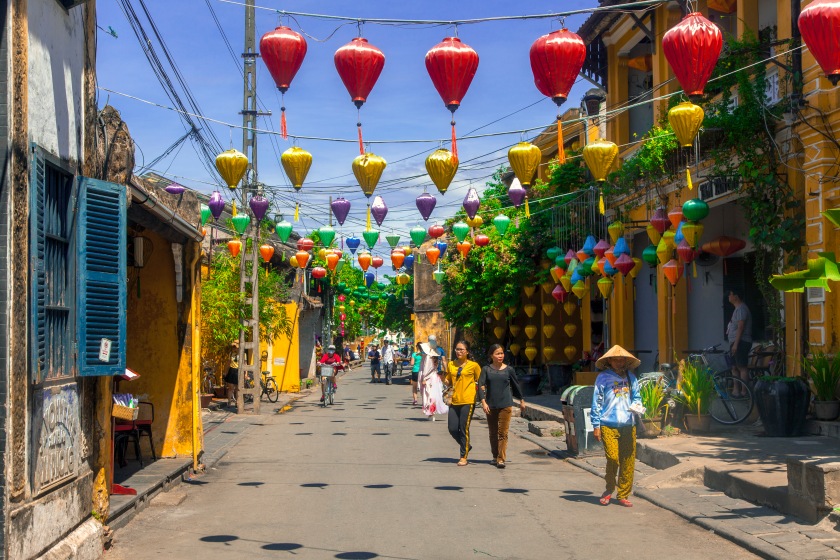 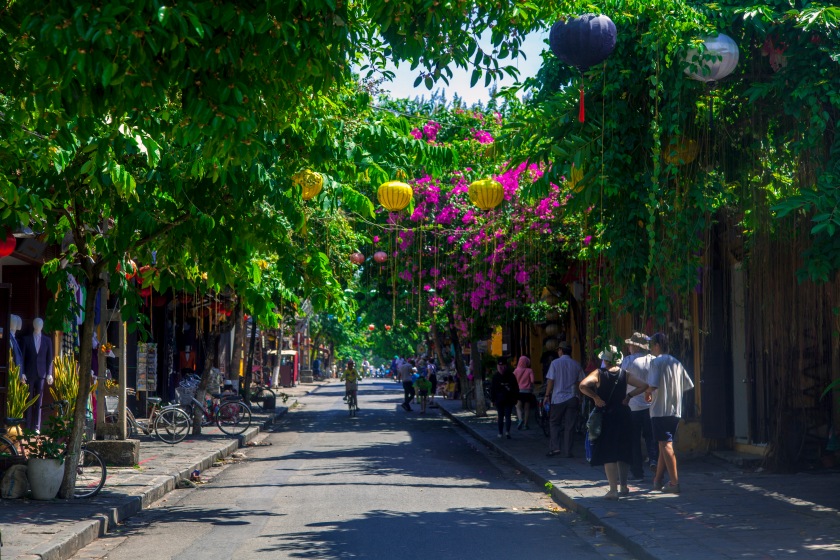 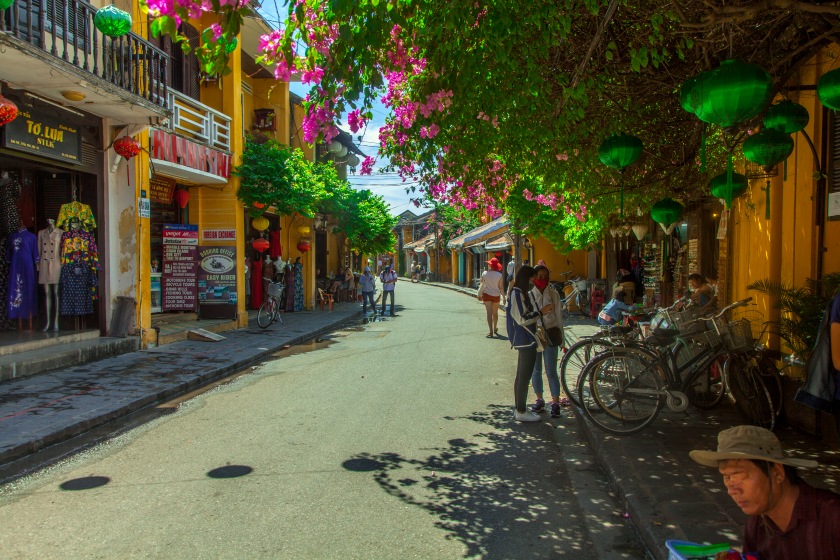 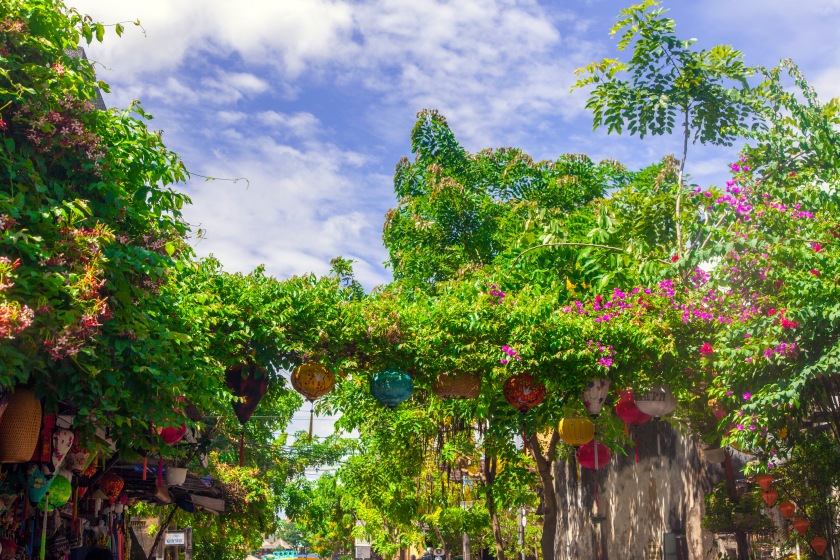 Our tickets included four attractions of choice, and Nam started with the Chua Ong Pagoda located in Chinatown and built in the XVII century. 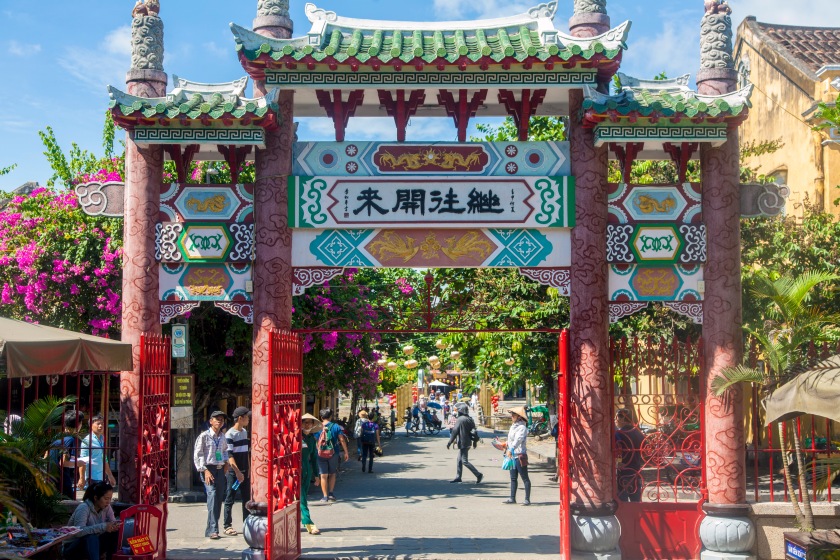 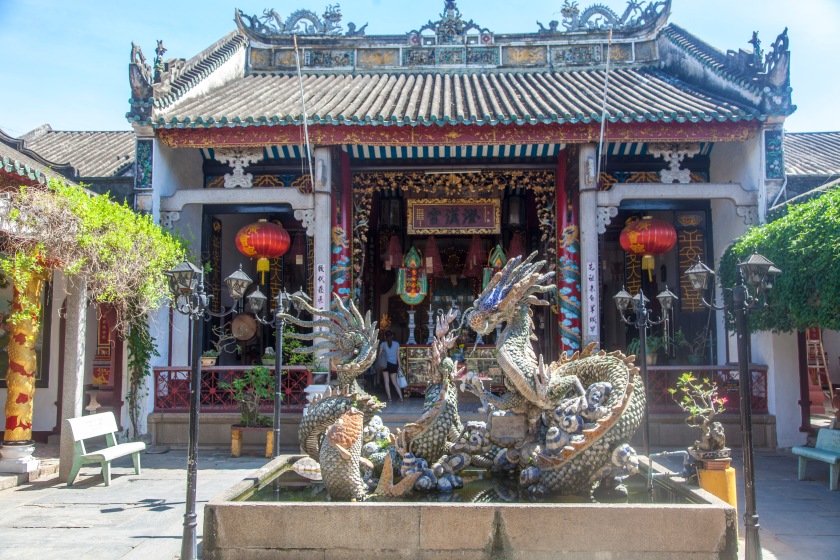 Next in our programme was a visit to one of the oldest family houses in Hoi An. The family still lives here, on the first floor. We were only shown only the ground floor, where the interior was decorated with elements of Vietnamese, Chinese and Japanese styles. For example, there was an interesting writing in Chinese characters, where each character was comprised of birds cut out of mother-of-pearl. 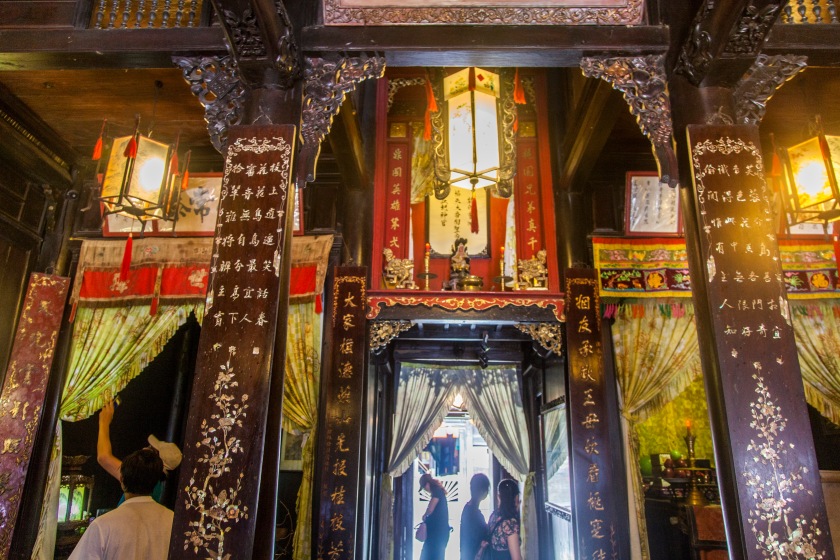 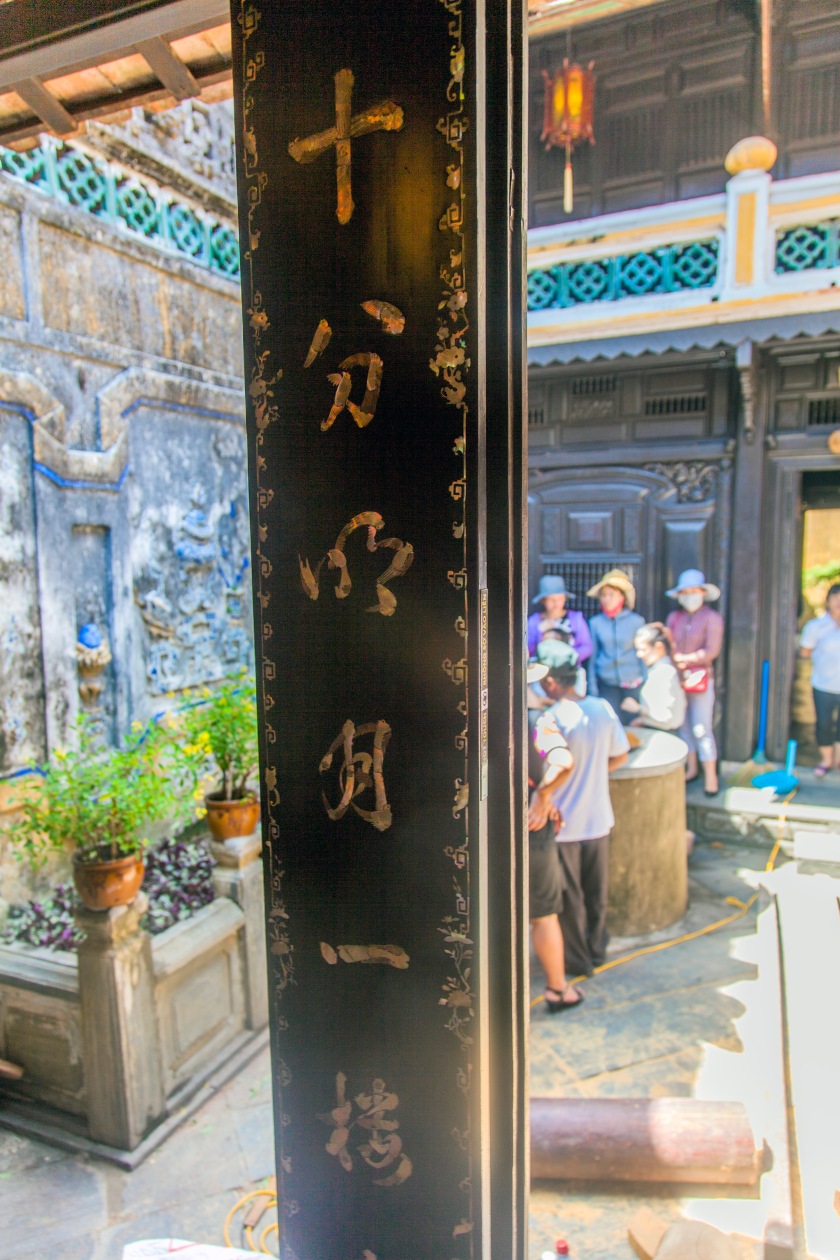 Next, we visited a little performance with songs, traditional dances with pots and fans and a game like bingo, where everyone was given a card with different Vietnamese words, and the singer sang a song and picked out the sticks on which the words were written. We weren’t the lucky ones to win, but some lady got a small silk lantern. 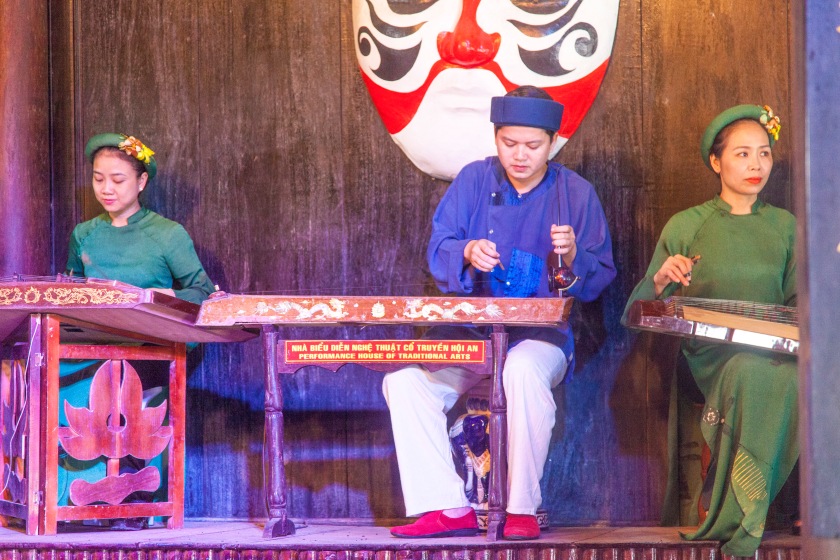 I’m not really mentioning another pagoda we visited, especially since I don’t even remember its name, but the Old Town tour ended with a visit to Central Market. The idea of a big food market is nothing unheard of, but the goods displayed are very exotic to us: there are tons and tons of tropical fruits, and a huge amount of unfamiliar herbs (I already mentioned how I had the impression that the Vietnamese eat everything that grows), and different types of hot pepper, and also something looking like a huge dining area with cooked foods. 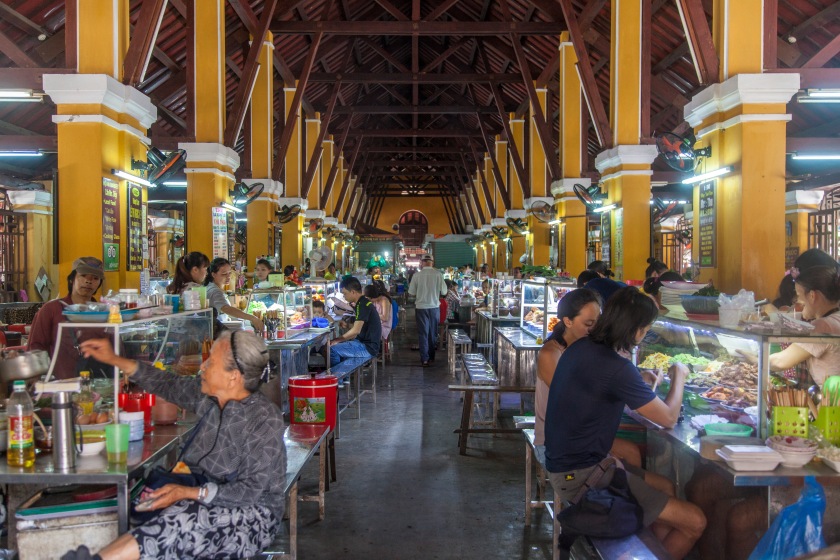 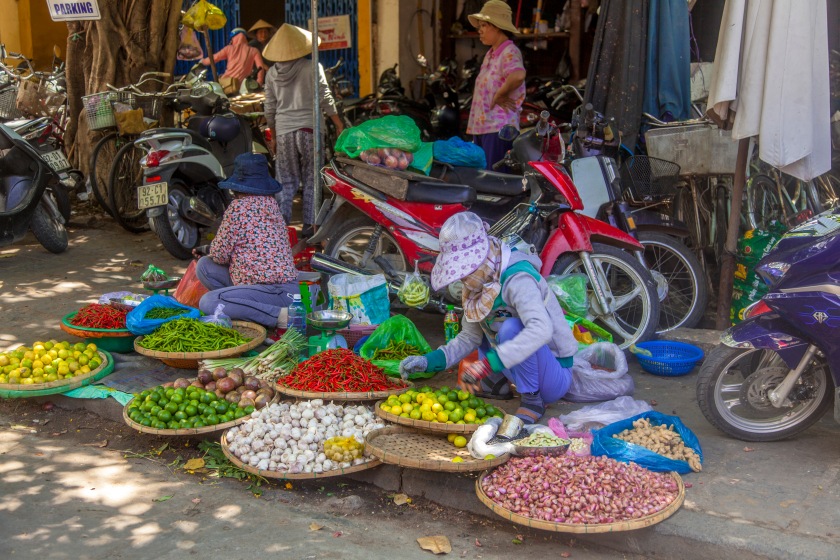 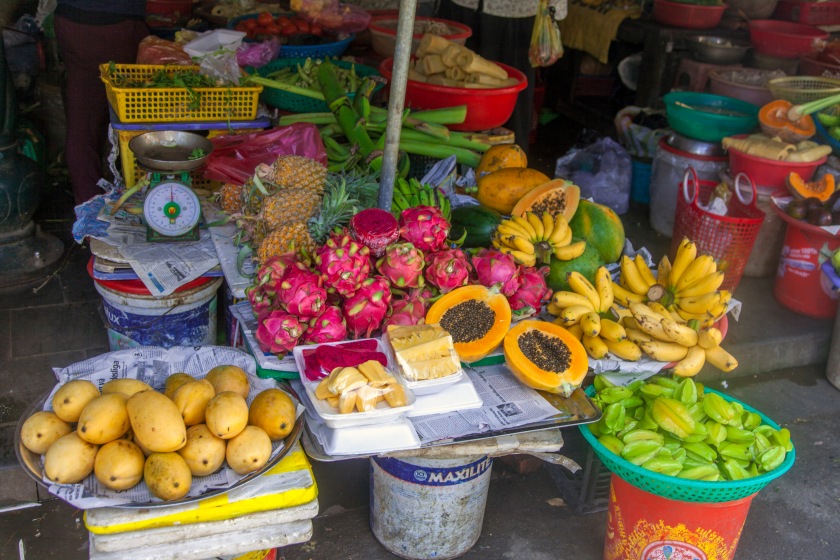 That marked the end of our Hoi An tour, and we headed back to Danang, because that is where the airport, from which we were later supposed to fly to Hanoi, was located. But our tireless guide still had plenty of energy, so he arranged two more photostops for us. The first one was on the beach, from where the Lady Buddha statue was distinctly visible. To be honest, a beach doesn’t make much sense unless you can swim and sunbathe there, but nevertheless we took a couple of photos. 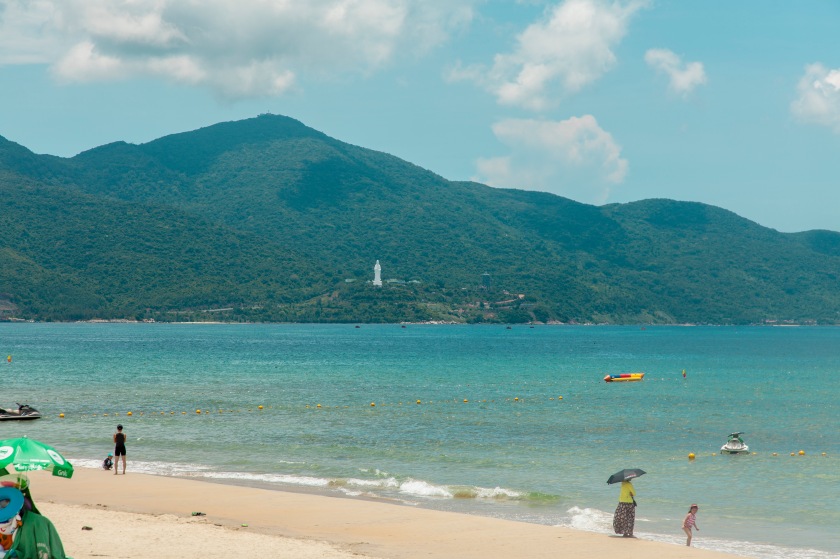 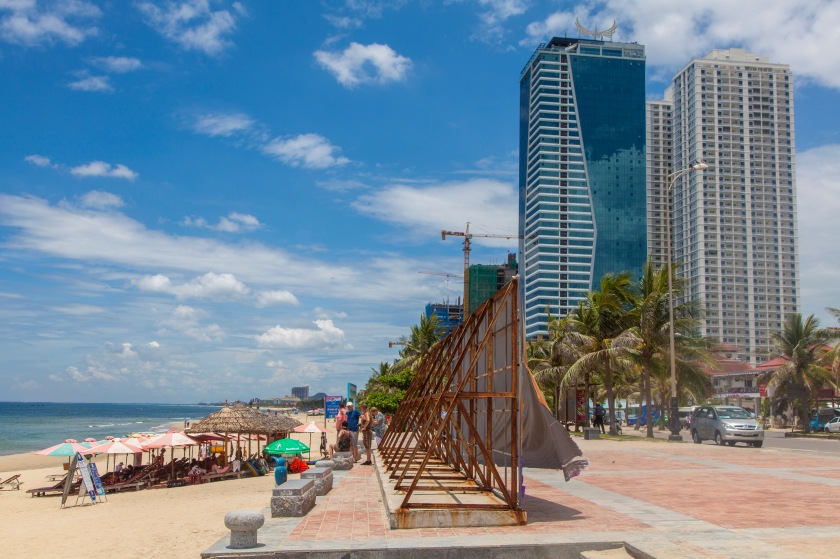 The second stop is by the Han river, because one of the main attractions in Danang, where our guide lives, by the way, is a dragon-shaped bridge across this river. And nearby there is a marble statue shaped like a fish with the head of a dragon, for which Danang is sometimes called the second Singapore. The origin of this strage creature is from the legend about the koi carp, which will turn into a dragon if it can climb up a waterfall. The sculpture depicts exactly this moment of transformation. 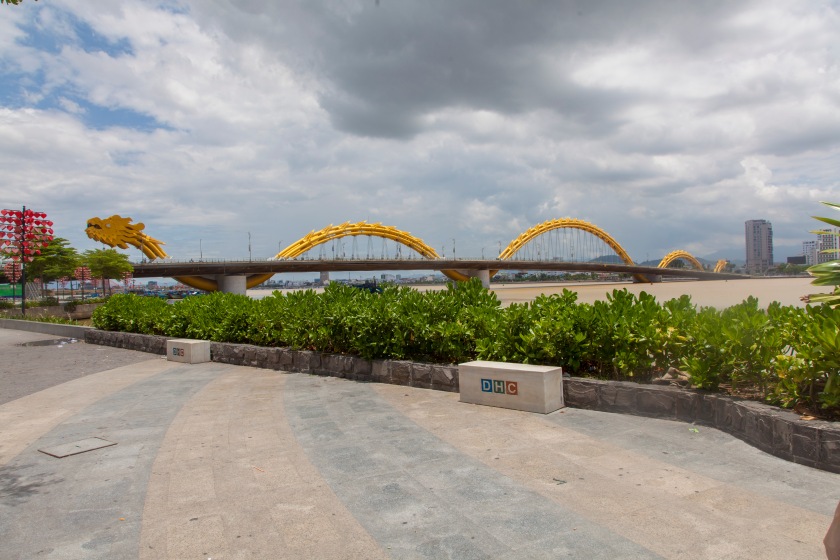 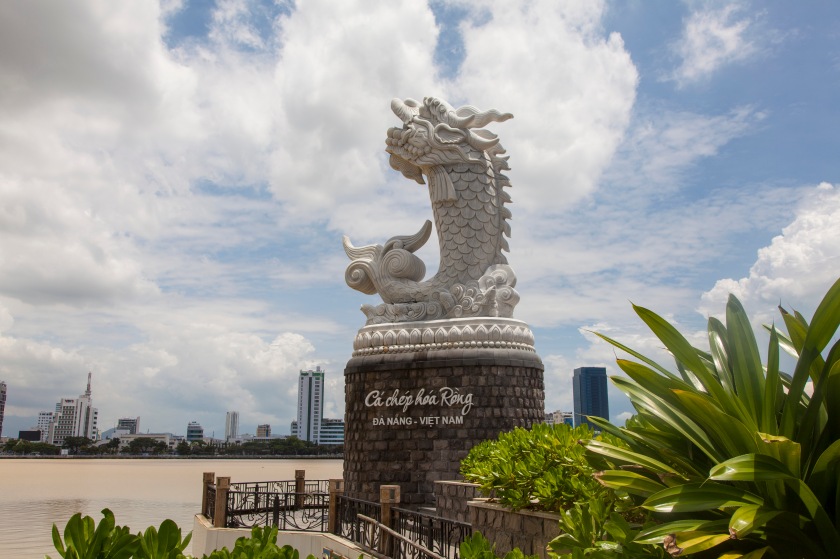 But even that wasn’t it yet – there was still a museum visit awaiting us. It was the Museum of Cham Sculpture and, quite honestly, it was already superfluous, as we were too exhausted by the terrible heat. But we still made a whirlwind tour around the museum. The museum hosts sculptures and architecture elements of the Champa kingdom, which existed in the Middle Ages in Central Vietnam and where Hinduism was practiced. The French archaeologist Henri Parmentier discovered these artifacts in the early 20th century, and this museum was opened as a result in 1919, thanks to which, they are still intact, as many other Cham sculptures and temples were damaged during the Indochina and Vietnam wars. 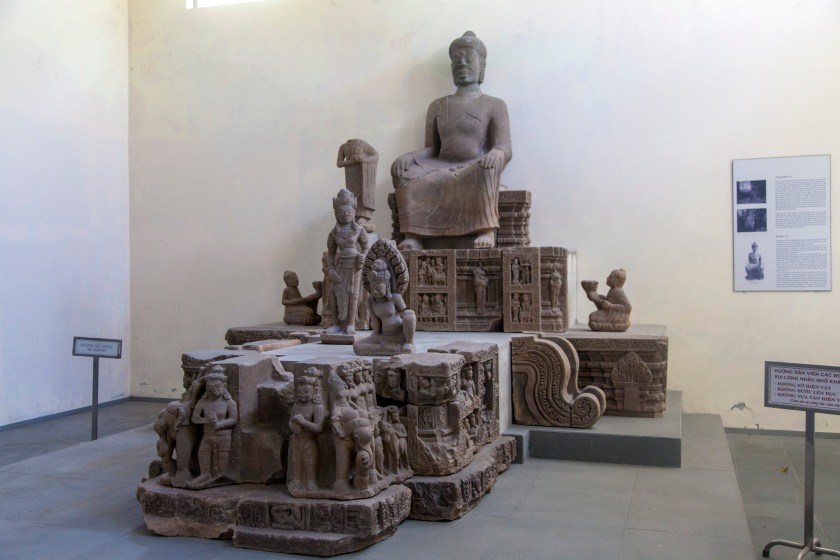 Completely exhausted, we headed to the Danang airport. Nam escorted us to the check-in desk and even checked us in for the flight. We also had lunch right at the airport. 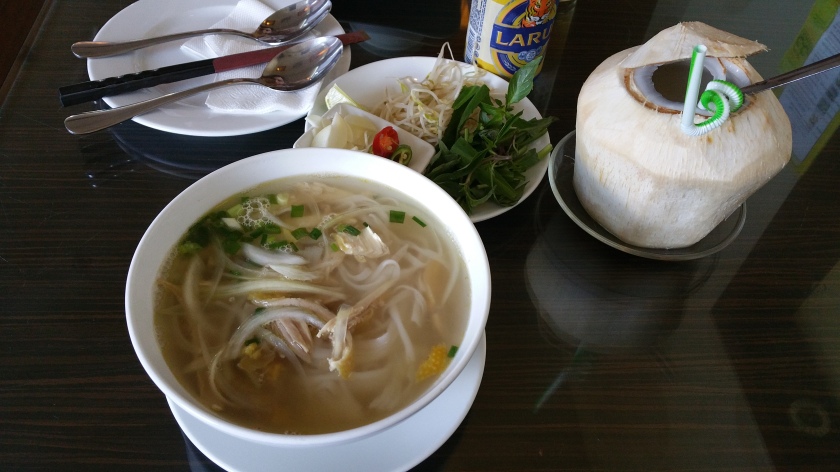 The flight was delayed by 20-30 minutes, but then again we didn’t have to hang around at the airport on the back end, since there is no passport control on domestic flights. In Hanoi, we were picked up by our new guide, Sunny, and headed to the hotel.

On the way from the airport you immediately notice that Hanoi is different. But I haven’t yet fully understood what exactly makes it different from Saigon, for instance. Perhaps, it’s the fact that the city is more modern, yet has more old buildings, and even the people look different – I mean, however ridiculous this may sound, they more look like urban residents. The façades of buildings are very narrow, like everywhere else in Vietnam, which I don’t think I’ve mentioned before, but here we actually asked Sunny about the reason, and he explained that in the old days there was a special tax directly related to the width of the façade.

Our hotel is located in the Old Quarter, apart from which Hanoi also have the New and the French Quarters. While we were waiting to check in, we were treated to some nice refreshments, as usual. 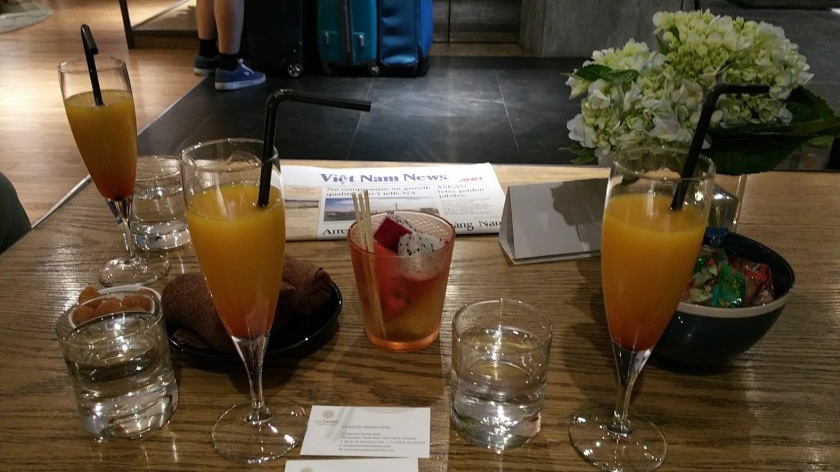 In the evening we walked up to the lake, also in the Old Quarter, to get some food, but the walk turned out to be more stress than pleasure. The traffic in the streets is even crazier than in Ho Chi Minh City, and the sidewalks are mostly non-functional – they are packed with parked scooters, street vendors and street food stalls with low tables and stools next to them – so one has to walk on the road, constantly shying away from scooters. On the other hand, there was such a thick crowd in the pedestrian zone near the lake, that even in the absence of vehicles it wasn’t too much fun either.

One of our observations in Vietnam, by the way, is about the general cleanliness. I mean, the streets are often chaotic, the sidewalks are cluttered, there is street food everywhere – yet, despite all this, there is no dirt, stench, rot and filth. Everything gets cleaned. Even toilets, albeit sometimes very shabby, are always clean and not disgusting. 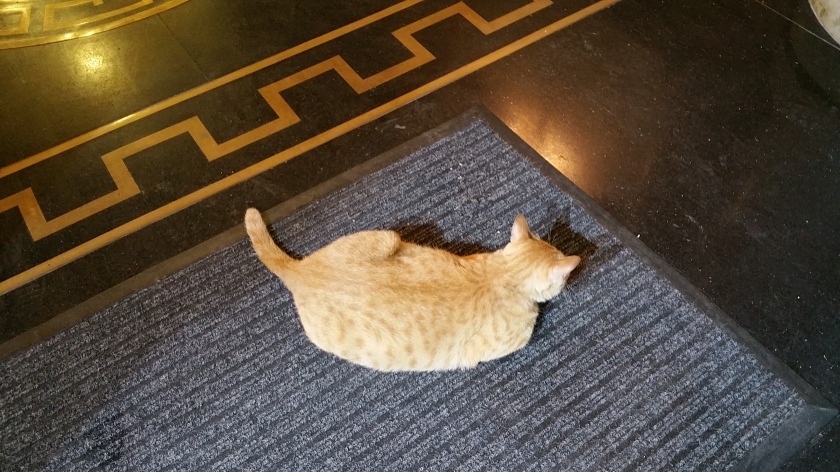