Today we made a particularly good choice, visiting the Chi Lin Nunnery and the adjacent Nan Lian Garden. 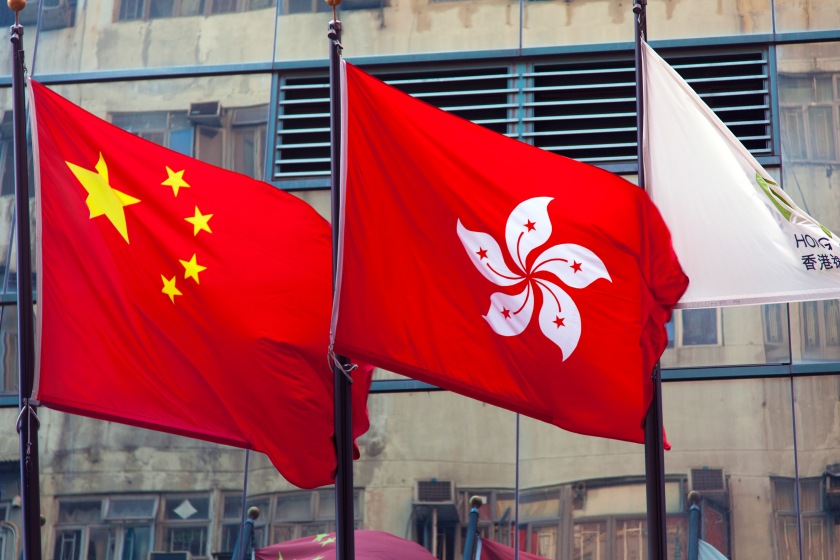 It’s hard even to imagine such beauty, peace and tranquillity as in this garden, which is essentially an amazingly harmonious composition of water, rocks and trees, and also traditional Chinese pagodas, bridges and pavilions. As for the skyscrapers in the background, not only don’t they seem to disturb this harmony, but they actually emphasise it in a rather unique way. 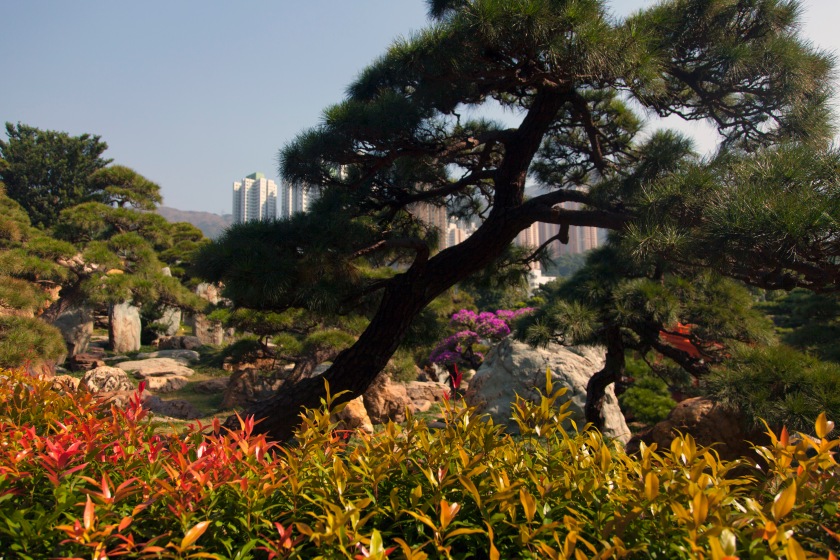 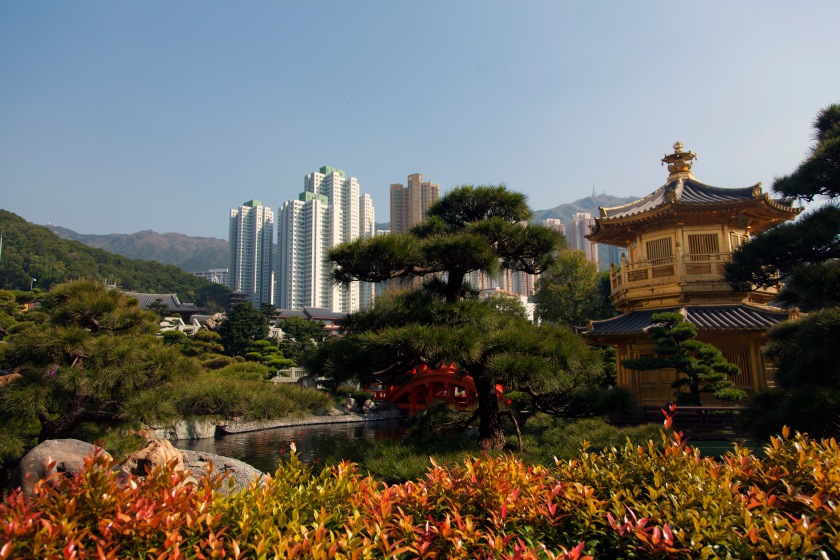 Overall, the garden is somewhat oval-shaped, and each turn of the track uncovers a new charming scene, e.g. giant banyan trees, or exquisite bridges over a pond with large colourful fish, or a waterfall with a water mill. And there you are, walking and admiring it all, accompanied by the low-pitch, vibrant, ’nasal’ sounds of guqin, a traditional Chinese stringed instrument, which feels like the most appropriate accompaniment in this place. 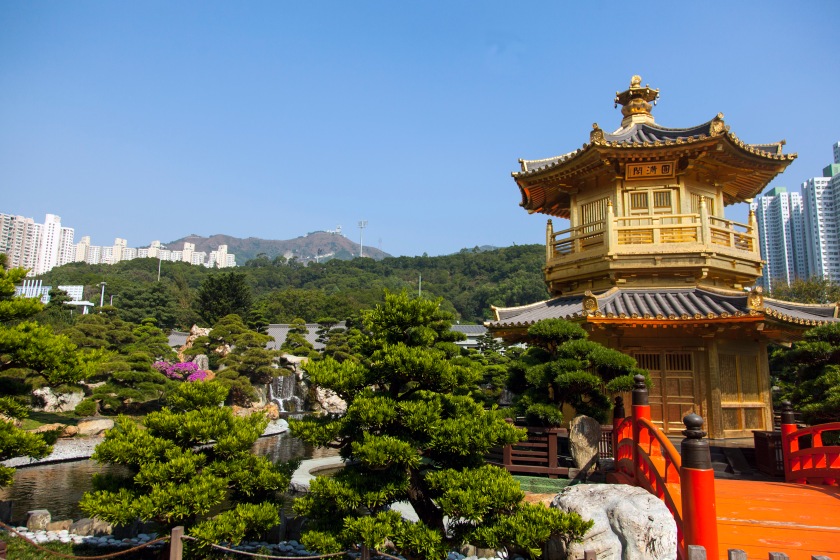 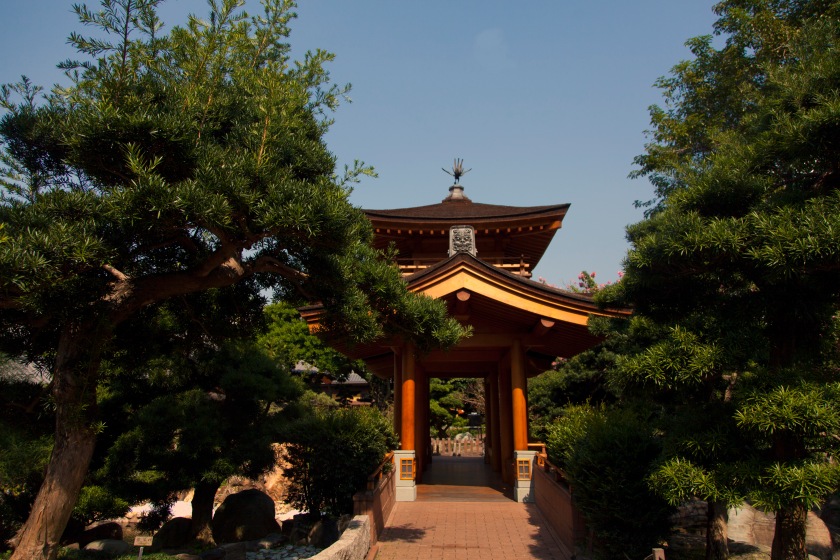 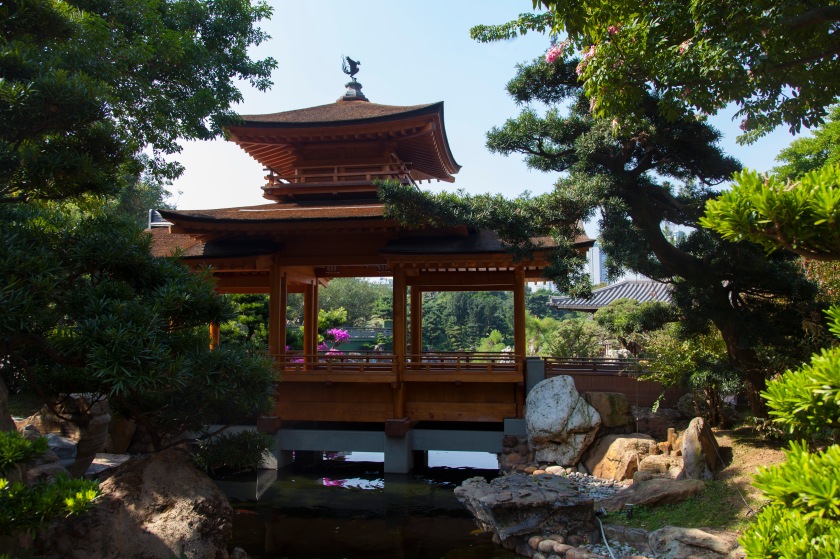 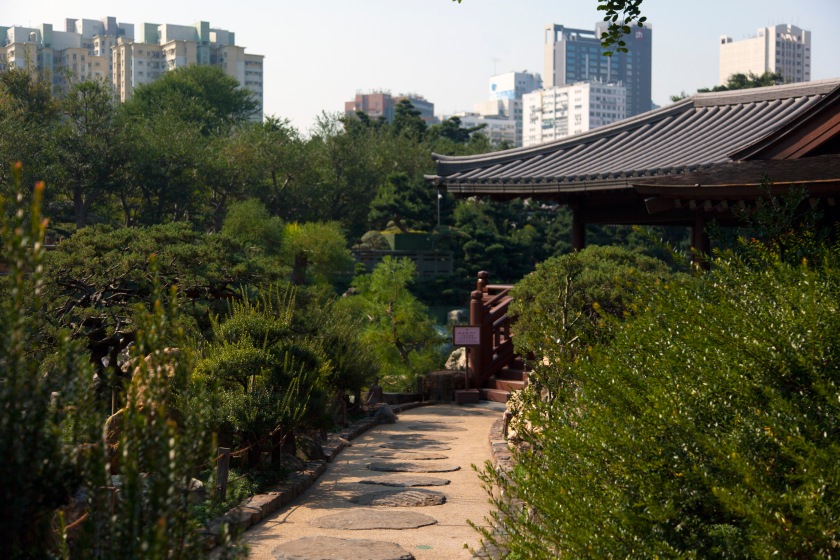 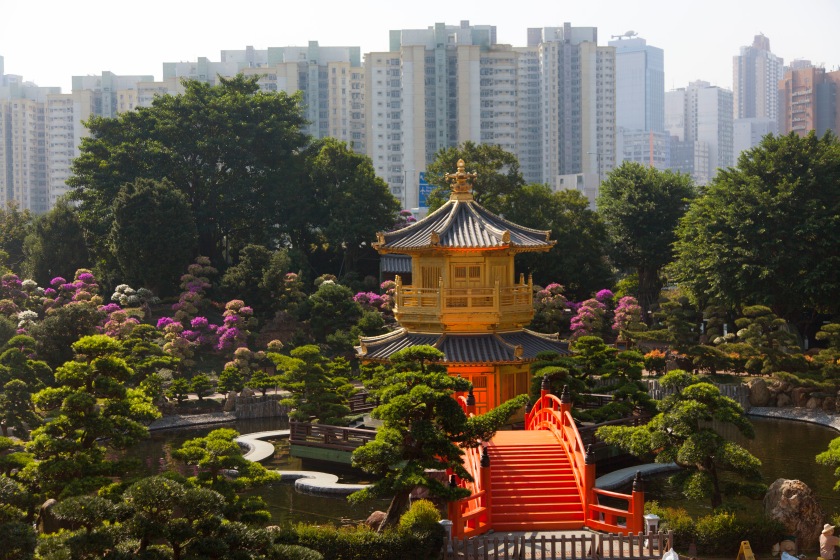 There are some lotus ponds right in front of the monastery. The petals move gently under the light breeze, and you feel like you could spend hours and hours just looking at them – at least, you somehow begin to understand Asians who find pleasure in the long contemplation of beauty. Neither taking pictures, nor even talking is allowed in the monastery, even in the public section (the other section, where the monks actually live, is closed to public altogether). There are sanctuaries on both sides, while in the centre there is a magnificent gilded statue of Buddha Sakyamuni. The monastery is also filled with music, not guqin sounds any longer though, but the chants of the monks. Even though we have nothing to do with Buddhism, still a sense of the sanctity of the place was definitely present. 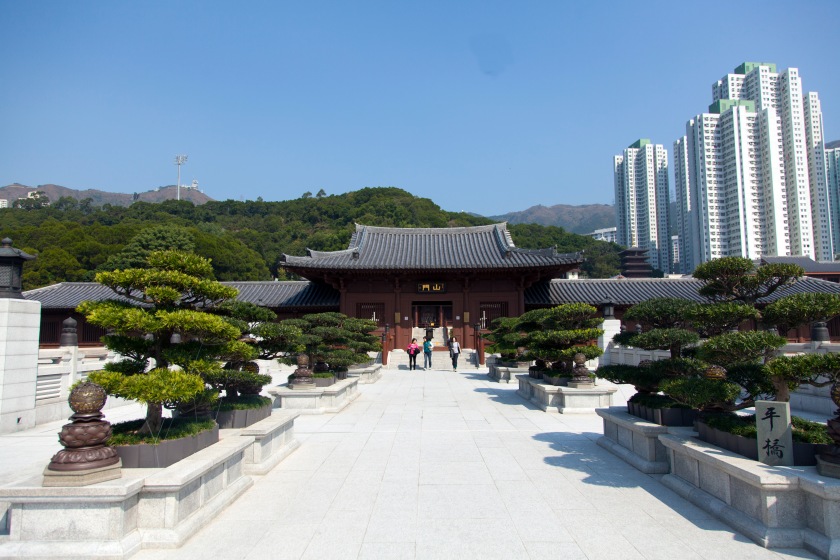 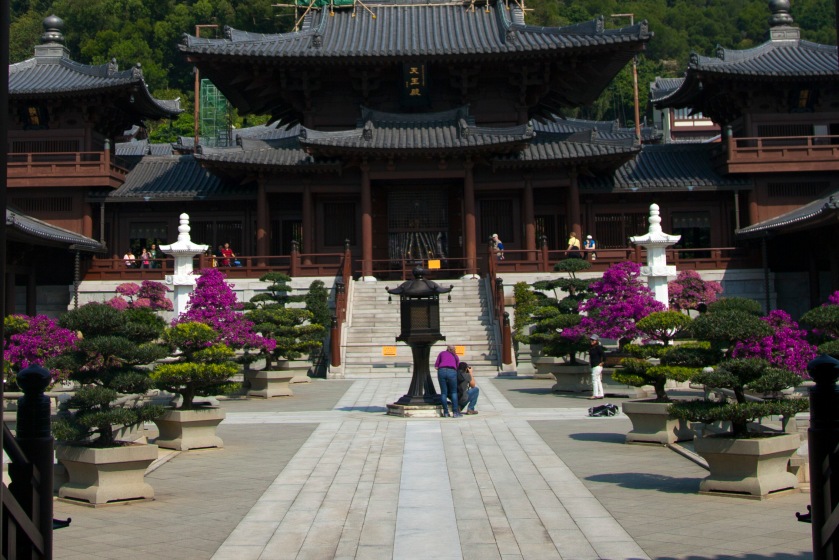 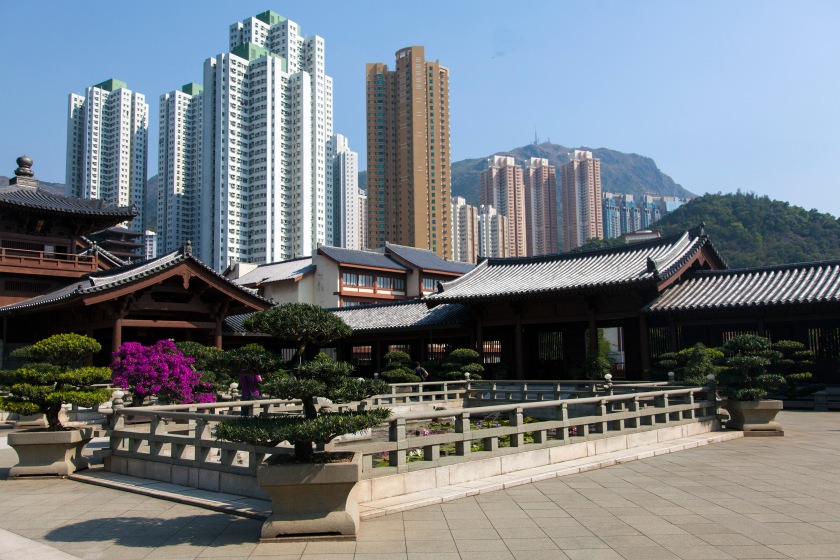 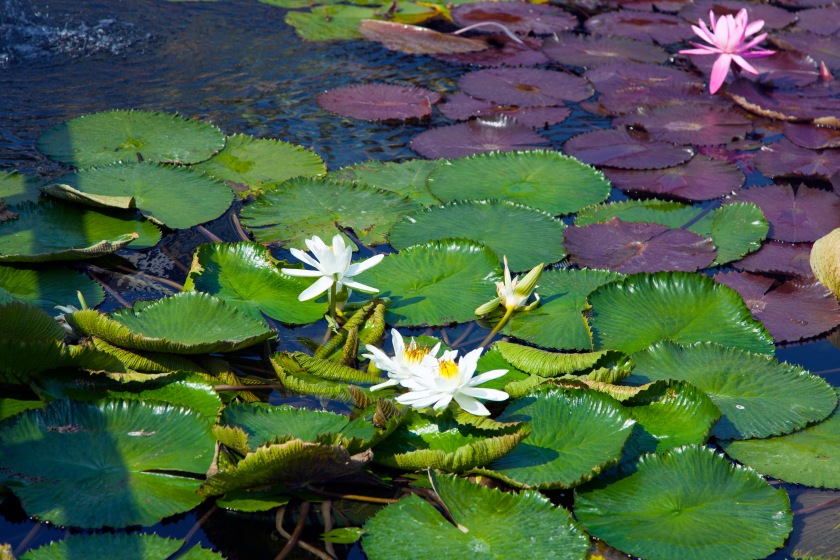 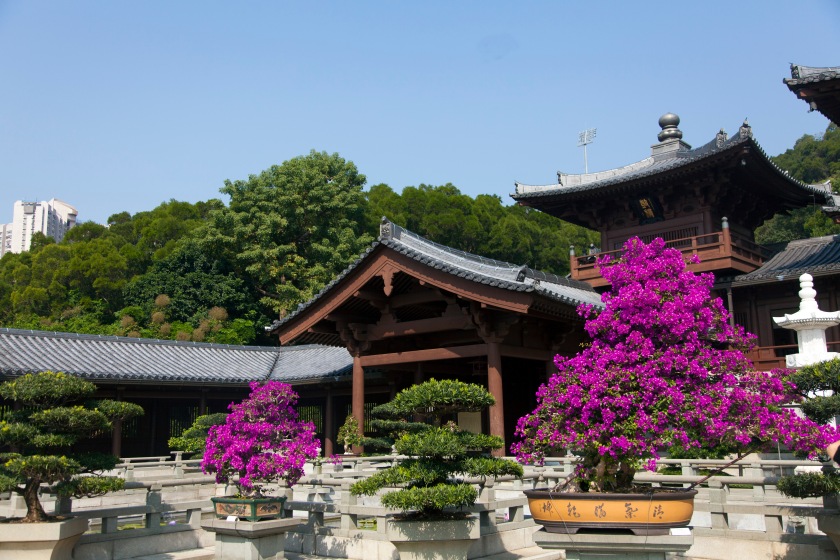 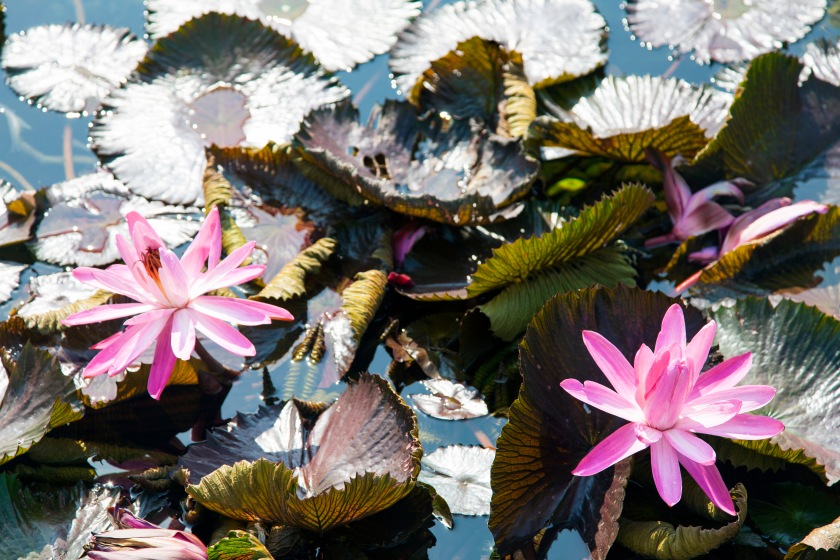 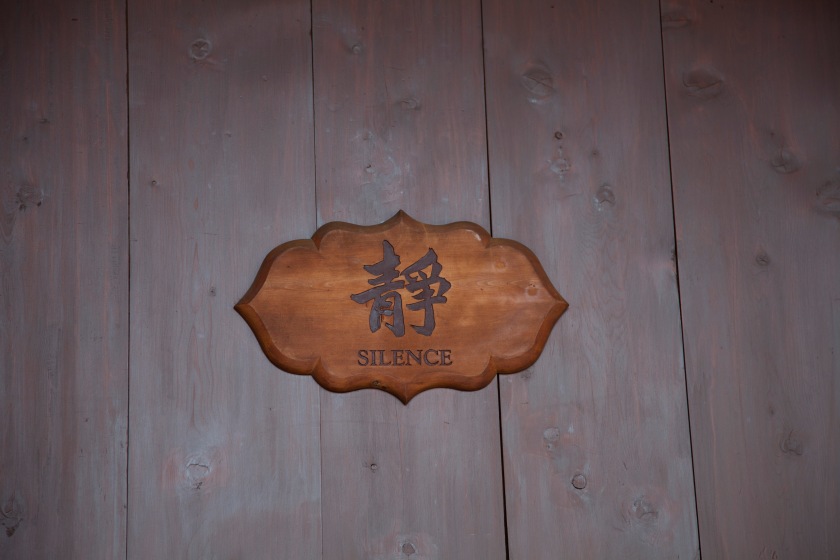 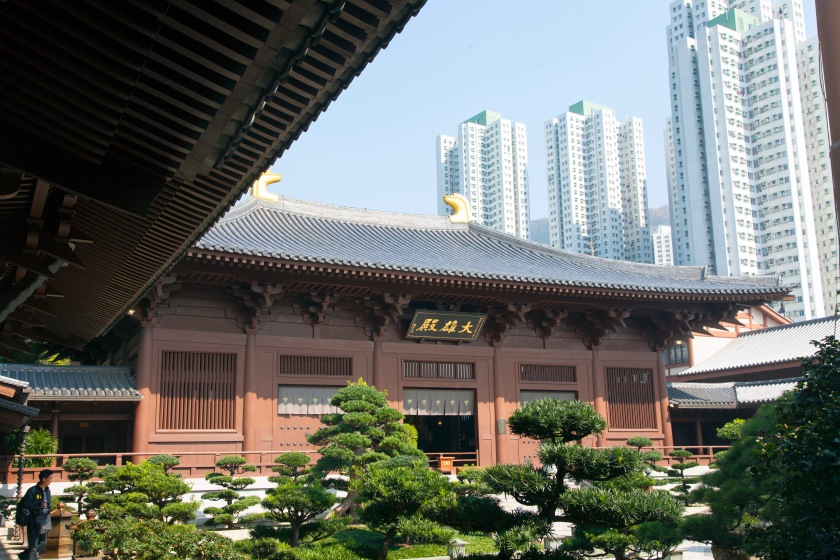 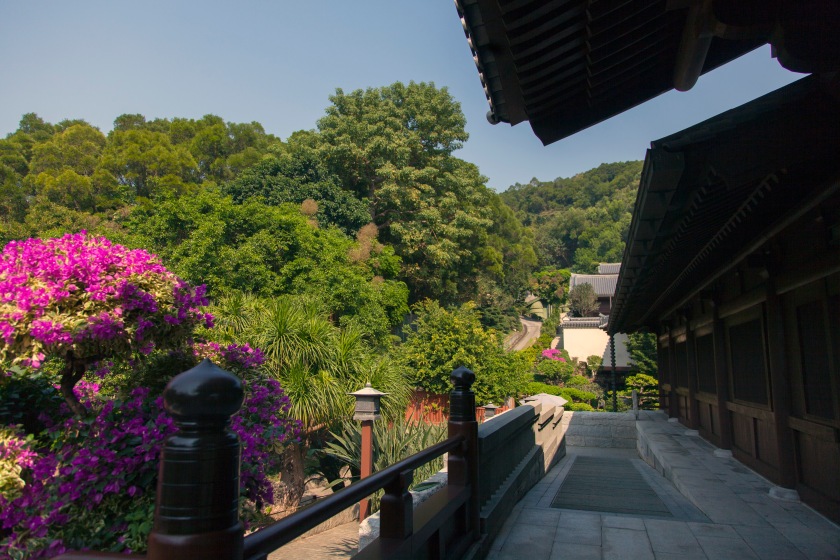 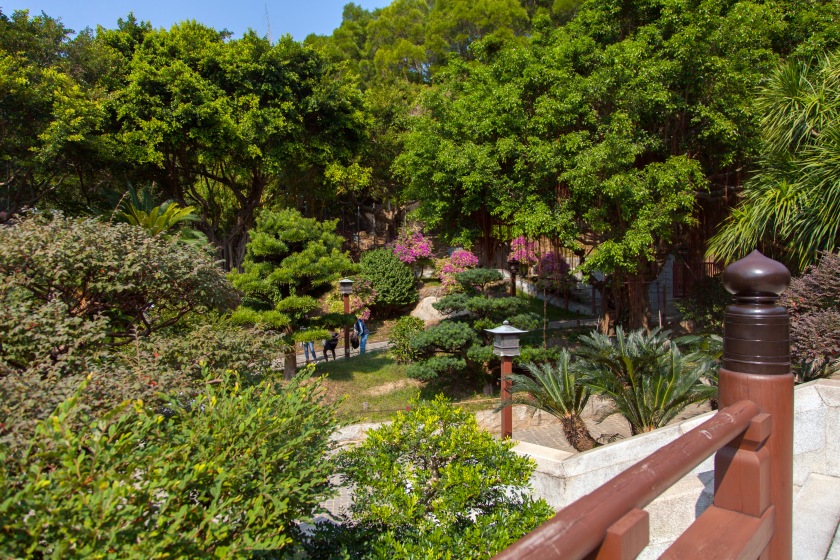 As we returned to the Nan Lian Garden, we decided to try the tea ceremony there. The tea house has a couple of requirements: first of all you have to remove your shoes, leave them outside and put on the slippers provided, and also to switch off your mobile phone and put your camera away, as taking photos and videos is prohibited. The order has to be at least one portion per person. And a portion in this case is not one cup but rather 6 grammes of dry tea, which can be brewed in a small teapot six times. But I’m getting ahead of myself here – before talking about brewing I have to mention that there is actually a high degree of self-service here – you fill the iron kettle yourself and put it on the stove to boil, then you call the waitress. She brings you teaware and dry tea leaves, explaining how to brew them. It is actually a whole science (or should I say art?) in itself: you first rinse and fill the teapot with boiling water (the teaware stands on a grid with a drain underneath it). Then you pour the same water into a jug and cups, which thus get rinsed as well. You carefully add the tea to the tiny teapot, fill it with boiling water up to the top, then immediately pour it away – this is how the tea leaves also get rinsed. Now comes the final part: you fill the teapot with boiling water once again, keep it there for just a few seconds, and then pour the tea into the jug (so that it doesn’t get any stronger), from which it can be poured into cups. 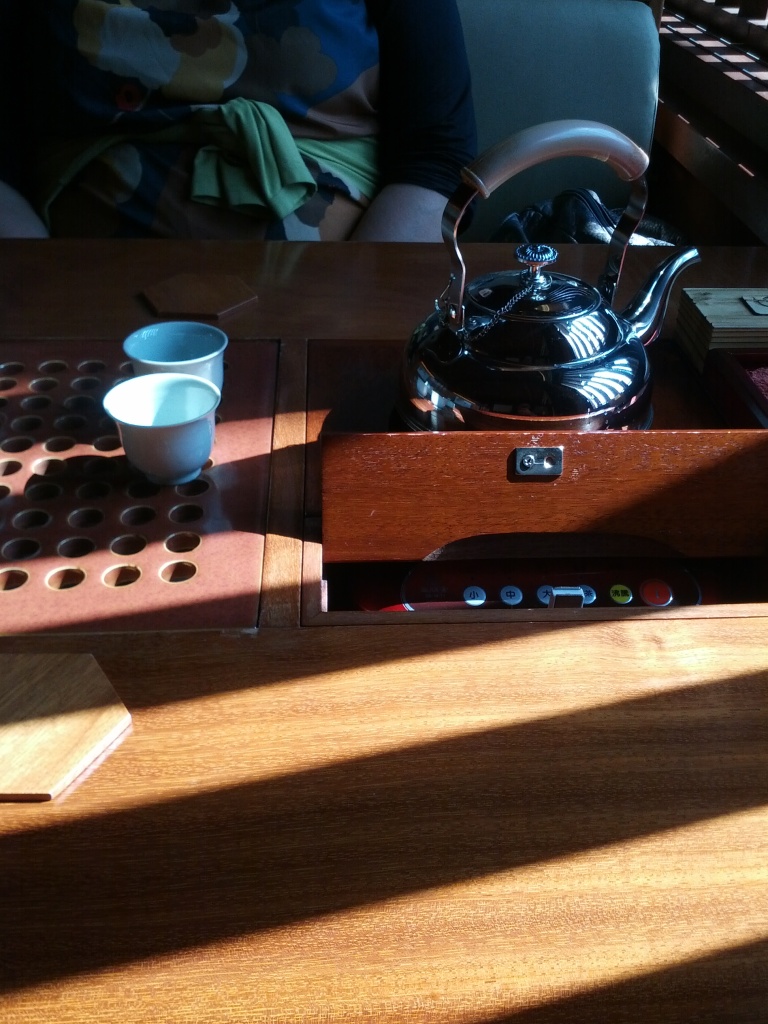 It’s worth emphasising that these six grams is a lot for such a small teapot, way more than the portions we are used to. The tea that we had is called Da Hong Pao, which grows high in the mountains and is considered one of the most expensive teas in the world. 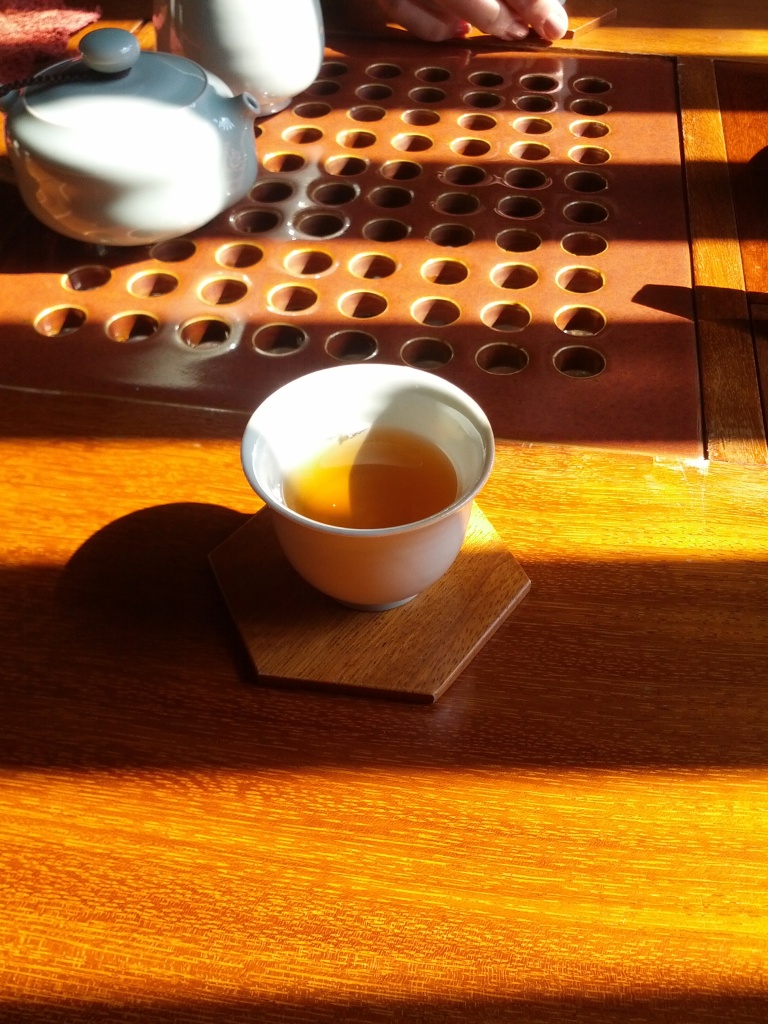 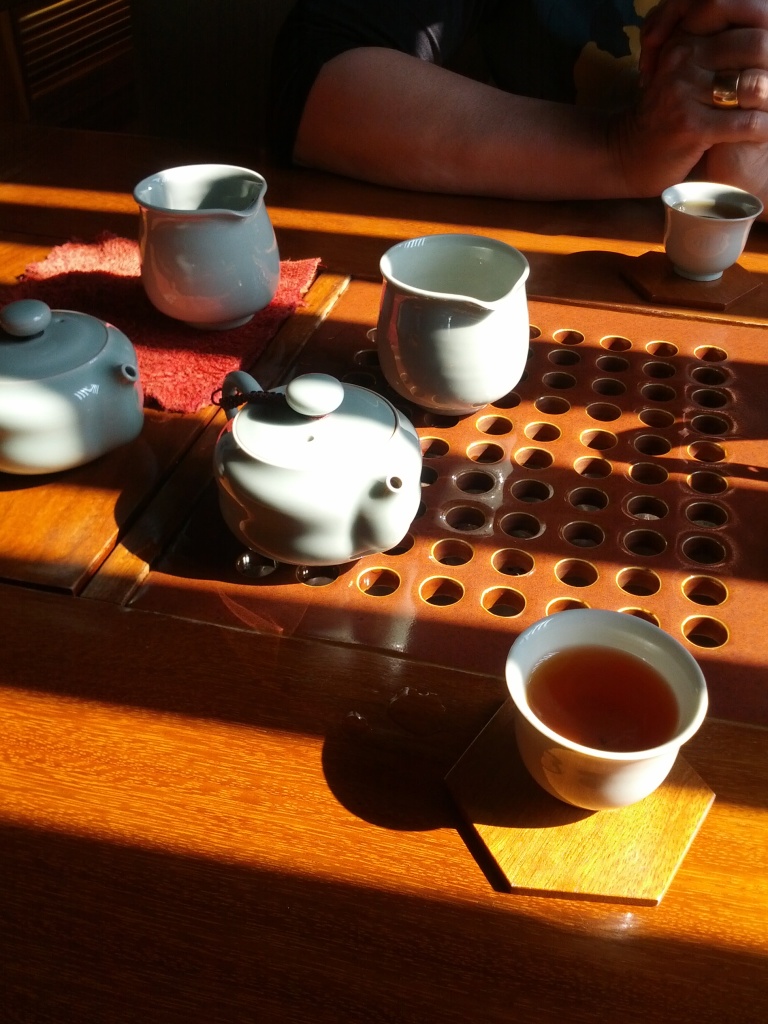 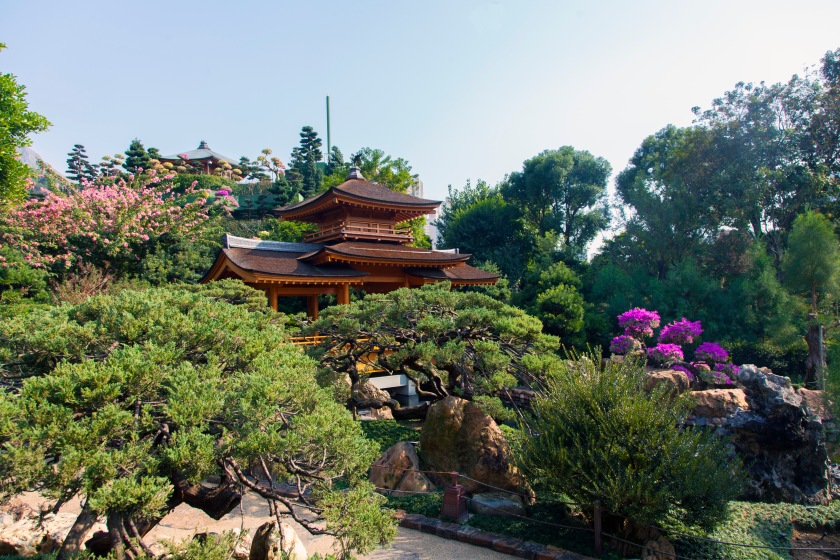 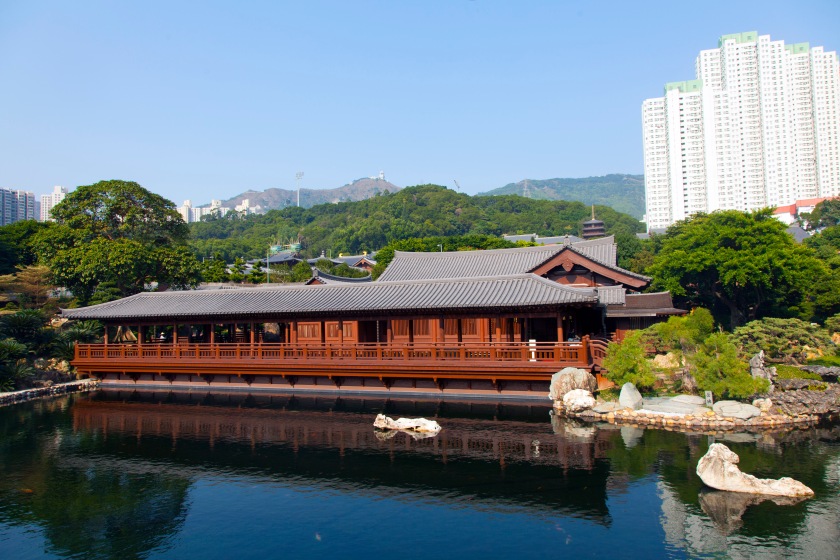 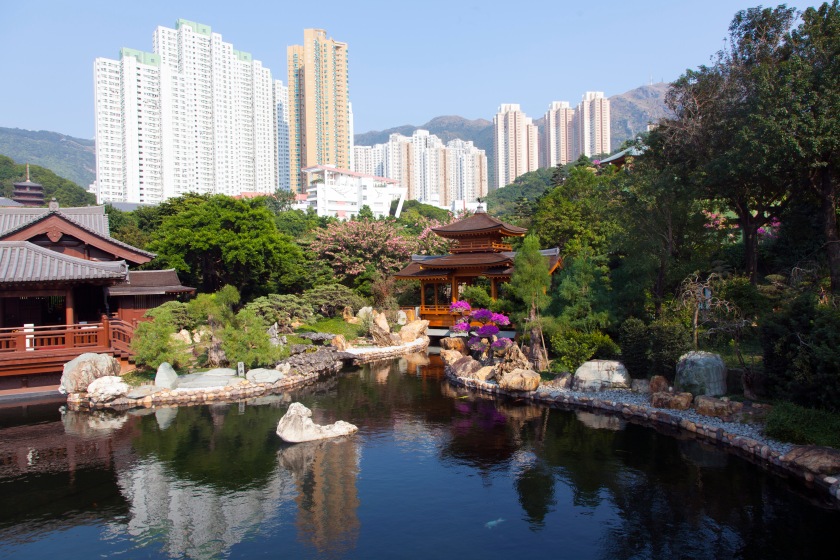 Our lunch that day was quite unusual too – it was vegetarian, as it is always the case with monastery restaurants, with a very high content of various types of mushrooms.

In the evening we went to Lan Kwai Fong yet again. Even though it was only Wednesday and not Friday, the place was way more crowded and fun than during our last visit – which in fact is quite logical. The last time we were here was Sunday, when pretty obviously very few people are keen on drinking and hanging out late before a Monday. And on a weekday, of course, many people want to relax and chill out after a hard day at work – this is exactly why we saw such a considerable number of ‘white collars’ there.